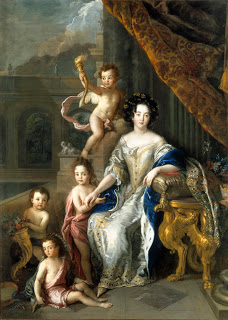 The Affair of the Poisons

from telegraph.co.uk: The Affair of the Poisons began in 1676 with the trial of an enthusiastic poisoner, the Marquise de Brinvilliers. Her brother had died after eating a pie of cocks' crests and kidneys in a rich cream sauce. A postmortem revealed disintegrating intestines. It soon became clear that, whenever she ran out of money, the Marquise simply poisoned another family member.

Her sentence was surprisingly lenient for the time: she was tortured, beheaded, and her ashes were scattered to the winds. The trial of the Marquise uncovered an underworld of fortune-tellers, alchemists and magicians dispensing a bizarre array of poisons: noxious bouquets, powdered diamonds, desiccated infant remains, mercury and arsenic. A special court called the Chambre Ardente was set up and began to collect dubious confessions. The quacks and swindlers who were interrogated under torture knew that shocking allegations might save them from the scaffold. They incriminated several high-ranking people, hinting at satanic orgies and plots against the king. Even the king's mistress was accused of poisoning a rival and lending her body to the Devil.

An obsession with poisoning took hold of the court of Louis XIV – a world of vicious sycophants and aristocrats who were bored enough to believe anything. In an age when unexplained deaths were common, poison was a plausible, catch-all explanation. Similarly, the idea that children were being sacrificed to the Devil seemed to match a horrible, everyday reality. Little bodies were often found in ditches and doorways. Unwanted babies were sometimes sent to "nurses" who performed what can most kindly be described as postnatal abortions.

For more, here is a link to the book being discussed by the reviewer, by Anne Somerset, entitled "The Affair of the Poisons: Murder, Infanticide and Satanism at the Court of Louis XIV" and another article here.