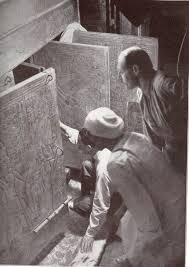 from Echoes from the Gnosis: During the decline of the Amarna period an extraordinary series of events was to take place; one of the most enigmatic of these has become known to Egyptologists as the “Dakhamunzu Affair”, or the “Zannanza Affair”.  During the second half of the fourteenth century BC, relations between Egypt and the other kingdoms in the region had become increasingly strained with the continual threat of uprisings, struggles and war.  The Egyptian empire had only a century before been expansive and magnificent.   This immense empire is apparent from our surviving knowledge of the campaigns of Tuthmose III (later dubbed “the Egyptian Napoleon”), stepson of Hatshepsut and great grandfather of Akhenaten-Amenhotep IV.  Tuthmose had expanded the frontiers of the Egyptian empire and its vassals where he is recorded as having captured over 350 cities.  Significant advances in warfare tactics together with improved weaponry allowed Egypt to take land through successful military campaigns.  These campaigns are recorded by Thanuny, commander of the army and chief royal scribe.  Despite the usual Egyptian propaganda to glorify their successes in battle, it appears that by the end of the Tuthmose’s long reign the Egyptian Empire extended all the way from Canaan to Syria.