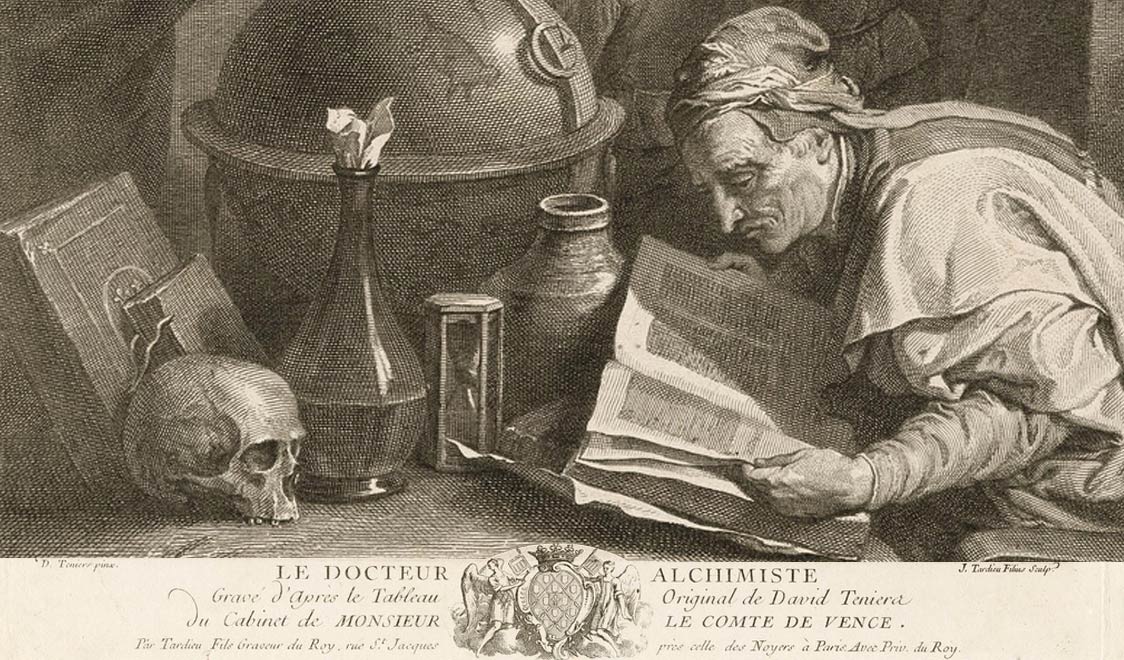 The Dual Search for the Philosophers’ Stone

from newdawnmagazine.com:  To say what the Philosophers’ Stone – the great goal of alchemy – is, one has to know. And to know, one must have attained it. I cannot claim to have done this, so what follows must be speculation.

The mystery grows deeper the closer one attempts to look. Even to say what alchemy itself is proves difficult. Of course, everyone knows what alchemy is – or thinks he knows: it is an outmoded form of science in which men in conical hats cooked and mixed various strange substances trying to make gold out of base elements. Or they sought to make the Philosophers’ Stone, a substance that was supposed also to produce gold – and to confer physical immortality besides. This project was totally deluded, but somehow gave rise to modern chemistry with all its wonders and curses.

However cartoonish it may be, this picture has some truth to it. Or so the stories suggest. According to one, the seventeenth-century Flemish scientist Jean-Baptiste van Helmont once received a curious visitor to his laboratory. The stranger did not identify himself, but offered to give his host a piece of the Philosophers’ Stone. Van Helmont accepted on the condition that he be allowed to conduct his own experiments on it in the stranger’s absence. His guest readily agreed, asking nothing in return for the substance; the scientist’s conversion, he said, would be reward enough. The stranger left, never to be seen again.


“I saw and handled the Philosophers’ Stone,” van Helmont wrote. “It was a saffron-coloured powder, very heavy, and it glittered like splinters of glass.”

Van Helmont had his assistants melt eight ounces of mercury in a crucible. He then added the powder and sealed the vessel. Fifteen minutes later he opened it and was astounded to find a lump of gold.
In 1666, the Dutch scientist Helvetius had a similar experience. Given the Philosophers’ Stone by a stranger, he was able to transmute a piece of lead pipe into gold that an assayer called the finest he had ever seen. Later, when the gold was melted down, mixed with silver, and separated out again, there was more gold than there had been at the beginning. Evidently some of the silver had been transformed by contact with this alchemical gold.

Such stories abound in the literature of the early modern era. We read not only of mysterious strangers visiting early scientists, but of such figures as the fifteenth-century French alchemist Nicolas Flamel, who, having learned the secret of the Great Art (as alchemists call their practice), amassed a tremendous personal fortune and endowed many churches and hospitals. Another Frenchman, Jacques Coeur, allegedly used his alchemically created wealth to bail out his bankrupt nation after the Hundred Years’ War. Alchemists were particularly welcome at the Hapsburg court of Austria in the seventeenth century, where they would commemorate their feats by striking their transmuted gold into elaborate medallions, at least one of which still exists.

Alchemy, then, appears to resemble chemistry to some degree. In fact one of the few practicing alchemists that I know in the US is a former chemistry professor who abandoned the conventional form of the science because he found it boring. But both the Stone and alchemy itself may offer greater mysteries still.

A completely different perspective on the subject appears in a book called The Hermetic Tradition by the Italian esotericist Julius Evola (1898-1974). For Evola, alchemy is not about gold and metals and stones. These expressions are just blinds to cover the alchemist’s real goal – immortality in the true sense of the word.

Evola distinguishes between immortality and mere survival after death. The latter is the lot of ordinary men. They go on to a shadowy netherworld like the Greek Hades or the Sheol of the Old Testament and lose all sense of personal consciousness. “In the eternal sleep, in the larval existence of Hades, in the dissolution – which is thought to be the destiny of all those for whom this life and the forms it takes constitute the beginning and end of everything human – in all this only those will escape who, while still in life, have learned how to focus their consciousness upon the higher world.” Evola goes on to criticise the conventional belief that “immortality is a certainty, not a problematical possibility.”

It was, Evola contends, the goal of initiation in the mystery schools of antiquity to confer this immortality. He quotes Plotinus, the philosopher of the third century CE, who wrote, “As the gods must one be, not as good men. It is not that one must free oneself from sin, but that one must transform oneself into a god.” After the decline of paganism and the triumph of Christianity, which did not support this effort in the slightest, the alchemical path was created as a means of concealing it. From this point of view, Evola claims, it was “much better then to speak of Mercury and Sulfur, of metals and puzzling things and impossible operations” than to allow the pure teaching to be desecrated by religion.

What, then, is the real alchemy? For Evola, it is the transformation of the body, especially in relationship to the spirit, to the life force. By this process the body goes from imprisoning the spirit to expressing it in a perfect way. “The corporeal principles are elevated to a higher plane, and ‘the two are made one’ in a spiritual corporeality; and the word that serves… to express that corporeality will be… the Philosopher’s Stone.” The symbol of the Stone is chosen because at this point “the body, as a completed, organised, and stable Nature is a ‘fixed’ thing as opposed to the instability of psychic principles and the volatility attributed to ‘spirits’.” This image evokes Christ’s parable that speaks of a man building his house upon rock rather than sand.

This state, Evola emphasises, is the true goal of alchemy. Its attainment is difficult and uncertain, and particularly in its later stages is hard to grasp. But that is not surprising: one cannot be expected to grasp something that one has not experienced for oneself, particularly something that is so deeply at odds with ordinary understanding.

In any event, much of Evola’s discussion, although it is far more lucid than we find in traditional alchemical texts, remains mysterious and puzzling. But there is one part of the process that is reasonably clear – the journey to the gates of death. By some process (which Evola does not describe) the candidate is brought into a kind of catatonic state that resembles death – except that he remains conscious during this process and then returns to life. This confrontation confers immortality – a stage that Evola equates with the alchemical term albedo or “whitening.”

Evola does not talk much, or at all, about the actual experience that the candidate undergoes during this initiation. Indeed the only first-hand account of such a process that I know of can be found in a book called Opening the Dragon Gate, in which a Chinese wizard named Wang Liping tells of his initiation into Taoist alchemy under the guidance of two masters in the almost unimaginable setting of Mao’s Cultural Revolution of the 1960s. Wang undergoes a death and rebirth process that matches Evola’s description.

There are other steps to the alchemical process as well. After the whitening stage, there is the rubedo, or “reddening,” in which the now-immortal spirit is reunited and reintegrated with the physical body. Does this confer physical immortality? The alchemical legends suggest that it does. Nicolas Flamel was reported to be seen hundreds of years after his lifetime in the fourteenth century; the eighteenth-century savant the Comte de St.-Germain, another heir to the alchemical legacy, was similarly said to be centuries old; and the Taoists have their legends of the Eight Immortals, whom author Victor H. Mair describes thus: “They are immune to heat and cold, untouched by the elements, and can fly, mounting upward with a fluttering motion. They dwell apart from the chaotic world of man, subsist on air and dew, are not anxious like ordinary people, and have the smooth skin and innocent faces of children.”

Like practically all legends, these tales are unverifiable, although by the same tack, they are impossible to refute: we cannot go through all seven billion people on earth one by one and prove that none of them has lived for hundreds of years. The physical immortality to which alchemy points remains, as Evola says, a “problematical possibility,” waiting for us around a corner that may or may not exist.

All this said, it is hard to entirely dismiss the more familiar version of alchemy. There are practicing alchemists who do work with metals, and, as we saw at the beginning of this article, there were even some who claimed to have attained the summit of this work. Again, these achievements remain elusive and legendary, but again negative proof is impossible.

Thus we are left with a dual alchemy. One path attempts to transform the essence of a metal so that it reaches its most perfect form (which was always held to be gold). The other path is aimed at transforming human nature. In the end, do these goals converge? They can only do so if the principle of consciousness that dwells within us is fundamentally the same as that which dwells in all of nature, animate and supposedly inanimate. In that case the two would in the end be one.