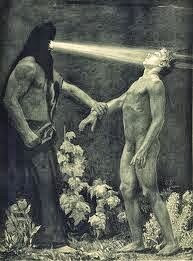 The Expansionary Occult Agenda That No One Talks About

from Disinfo.com: At this point we should all know that the word Occult is derived from the word occluded and is often interpreted as the search for “knowledge of the hidden”. By that definition, I’ve often pointed out that the most obviously hidden aspect of our society is that we don’t talk about what we’re up to exactly pretty much ever. If you came up to a person on the street and asked them the meaning of life, I’d say the likelihood they’d reply: “to blindly churn out as many humans as possible through reckless fucking and build as much new weird stuff as quickly as we can” would be fairly slim. I guess the reason for that would have to do with the fact that it sounds utterly insane when you say it out loud, which is precisely why we don’t do it. And yet, it is the supreme goal nearly all of us spend a great deal of our time contributing to every single day. Every day you get up and punch that clock, you’re helping feed the chaotic sprawl of freakish expanding psychosis that we call human reality. We’re continually on auto pilot.

This is the problem with looking outward rather than inward for spiritual insight. You might find yourself guided by “something else”. Years back I had what I refer to as my enlightenment experience after watching the film The Holy Mountain by Alejandro Jodorowsky. There’s some sort of cosmic trigger embedded in the very framework of that dude’s films which have jarred me into compelling contact dreams nearly every time I’ve watched them. In this one, I’m on a higher plane of reality and all of our conjoined plotlines are being churned out with zero regard to consequence by what I can best describe of as a 5th dimensional thought factory. Without getting into too many of the lurid details, I will say that the whole encounter left me with the distinct impression that the forces creating our world are going for pure batshit novelty, and novelty comes with volume. Not only that, but this dark quest for novelty is why we see the themes of increasing exploitation in our society. As above, so below. They’re artists, and we are but the means by which they make their art. They don’t care about us in the way we’d love to think they do. Why do bad things happen to good people? Because sometimes it’s hilarious, and how do you know those people weren’t actually assholes? See how easy that was.

You can’t understand things like dreams and hallucinatory transmissions by reducing them to binary thought modalities. They communicate by means of subjective metaphor which is why we don’t talk about our inner worlds publicly (except I do on Facebook constantly, friend me). Dreams don’t fit our agenda, our expansionary agenda. Say it out loud. Our expansionary agenda. It’s like we’re trying to mimic the big bang or bounding upward into the gangliest teenage growth spurt imaginable. Have we been packing on some excess lbs before graduation? Are we going to fit into our prom dress?

Having odd hallucinatory encounters like the aforementioned leads you into a whole slew of new and unusual contemplations. I suppose that’s the point to invoking them in the first place. I’ll never forget the public response to the economic meltdown in 2008. We’ve got to get things back up and moving again. We need new jobs, new economic growth. Over and over ad infinitum. Everybody blindly agrees without a single person saying: wait, maybe this is a sign. Maybe we should take this as a message that we need to rethink our priorities as a species. Buuuuut, we can’t do that. Why? Because we don’t talk about this project we all work on so diligently.

You can say the point is to make rich people richer, but that’s not capturing the true essence of the conundrum entirely. Granted, rich people being ginormous dickholes is a huge part of the problem impeding our further development as a species, but it’s not like the poor and middle class are somehow spiritually elevated creatures. As a matter of fact, (and get ready for me to piss absolutely everyone off) the poorest people with the least resources often have the most children. It’s a fact of life that even my most liberal of left wing Seattle friends cringe when you dare to acknowledge. This is how rich people get rich, by exploiting that cycle, but did they start that cycle in motion or did it come from somewhere else? Who would want to proliferate all that suffering? Daemonic fuckers preying on humanity, that’s who. It’s not that they’re evil, they just like horror stories. They like a lot of other shit too, like professional basketball and Grand Theft Auto. They see the “cycle of lives” we live (and yes I’m quoting the voices from my trance states) and how they’re interrelated.

Here’s a thought, if you want to protest wealth inequality, quit having kids you can’t afford. The system of increasingly devalued labor we’re trapped in is entirely dependent on an endless supply of wage slaves lining up to be devalued. What if you cut off the supply at the source? You’ve made it so bad for us, we don’t even want to bring any kids into this hell you’re feeding from. That’s fucking rebellion. Seems like an unreasonable sacrifice to most but some people had to fight in wars and blow other people’s heads off to change our world for the better. A concerted effort to not procreate for a generation seems like a minor concession in comparison. The powers that be would lose their shit and it would absolutely work. Rather than a hunger strike, a birth rate strike. I’ll file it in the never, ever going to fucking happen category. Totally unthinkable.

Why? Because of our agenda. Don’t you feel it, inside you, compelling you in ways you don’t even understand? If I wanted the population to absolutely sky rocket as fast as possible, the first thing I’d do is take control of organized religion from afar. If you can keep people away from sexual expression and transpersonal mindgasm enlightenment, you can get them to spit out kids like weeds from sheer boredom alone. Let me cut the bullshit and sum up the underlying message behind the majority of conservative religions: don’t do drugs and when you fuck, have as many kids as possible. It’s just good business, gotta fill those pews. Billionaire assholes will further bind themselves into those crap roles by making horrifically awful karmic decisions that affect them irreparably, damning themselves to reincarnate as the very people they’re preying on. We’re writing a tragic-comedy with our genetic code, and the thought of taking better control of this process is absolutely the most controversial and off limits area of intellectual inquiry imaginable to us. Nuts.

And that’s the problem with turning your back on things like the Occult. When you do, they have a tendency of turning on you. So we now find ourselves oppressed by a daemonic hyper-growth serum unconsciously. You know what I hate the most about it? What it’s done to conversation. “How are you doing today?” “I’m fine.” “How about that sports team or the weather.” “Yes, the sports teams and the weather, those are excellent”. “Have another beer or fatty food.” Here are some basic things you should never bring up in casual work or family discourse: religion, politics, dreams, drugs, sex, alternative spirituality, meditation, or any kind of subversive art (which is why I enjoy things like Twitter, where you can follow me). Why? The agenda. Broaching these topics can potentially halt the common flow of basic expansionary business practices. Goes against everything we believe in.

But why do we believe in these things? At the heart of nearly every godhead spiritual encounter is the message that you are judged by the way your actions inspire others. I had a vision like that myself accidentally once. The reason we hate this logic so has to do with the fact that we find our daily behavior in direct opposition to it. Well, if that’s on point, then we’re totally fucked, I mean, we spend all of our time encouraging people to have tons of kids and building more and more useless shit. That’s what the purpose is in life right? Nope, just the way you’ve been programmed, and I don’t think you’d like who’s doing the programming. They’re creating ideas. Once an idea makes its way into the collective unconscious, it exists eternally. Once you create something as ridiculous as twerking, it’s always there. See, I’m thinking about twerking right now. I just pictured myself twerking on a Segueway with a witch with flaming pubic hair. Good witchy flaming pube times. I could dream about something that ridiculous in the non physical realms. It’s entirely possible, everything is. We make these ideas, and they can swoop in and grab anything they want, or edit out anything they don’t. The question is, do we identify this unconscious compulsion and find a way to make “earth as it is in heaven” or do we keep churning out more product to meet the quotas of our psychotic overseers? Remember when I said these things were metaphorical? As above, so below.