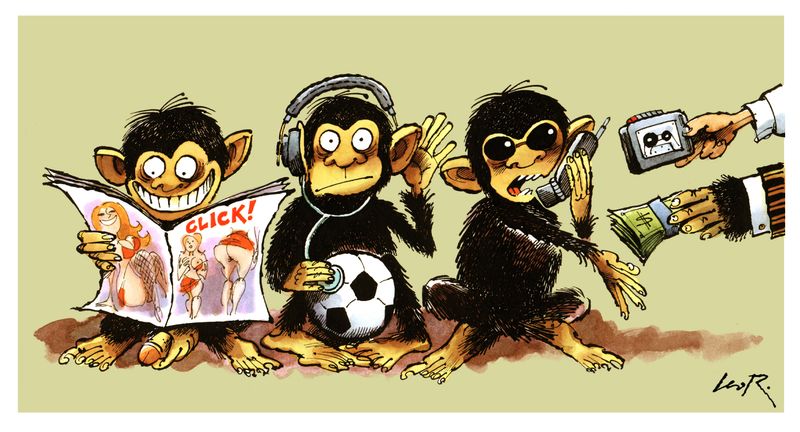 While consistent across cultures, these archetypes have been subdivided in many ways, have borne countless different names, and their attitudes toward one another have varied (slightly) from age to age. But the essential dynamics of society has never altered. Even after enormous upheavals and irrevocable changes, the same pattern has historically reasserted itself over time, just as gravity finds equilibrium.

These four societal archetypes are inevitably intertwined, and their aims entirely reconcilable. Although their behaviors are dissimilar, their differences fit together into one dysfunctional whole, comprising a society’s collective relationship to information, and indeed, its own truth.

Despite dramatic alterations in the world’s geopolitical landscape, and some fluctuation of individuals from one group/role to another over time, the dynamic between these groups has historically remained the same. What has changed in the technological age is simply that we have more ways and means to use, misuse, refute and refuse information.

These archetypes may seem like generalizations; and they are. They are also ancient and universal in structured societies. How people interact with new information is a result of both primal response and experiential programming, so understanding these archetypes can reveal a great deal about people and their character. In my experience as a truth-seeker and an activist – a patriot – this is the only thought-model or assumption that can truly help us understand how people relate to information, and therefore how we can best relate information to them.

There is an ancient adage and image that depicts the thinking and being of people through a series of archetypal monkeys; Hear no evil, see no evil, and speak no evil.

Commonly known as The Wise Monkeys or The Three Wise Monkeys they are typically depicted sitting next to each other in a row. One covers its eyes, blinding itself. The second covers its ears, deafening itself. The third covers its mouth, gagging itself. Of these supposedly wise monkeys, none seem much the wiser for its ignorance. In fact, each character is hampering itself and its experience of its surroundings – of truth and information – in one way or another. And yet this adage of ‘wisdom’ is still widely accepted.

What most people don’t realize, however, is that the depiction of these ‘Three Wise Monkeys’ is a deliberately incomplete narrative; there is actually a fourth Wise Monkey that is seldom depicted in western interpretation. Representing the virtue ‘fear no evil’, the fourth monkey sits with its arms folded over its abdomen. It is the patriot who, fearing no evil, questions information to learn and share it with others, in order that all may progress. It is indeed the only of the monkeys that shows any wisdom at all!