The Great British Bacon Scare of 2013 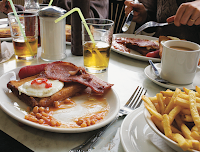 from macleans.ca: Britain still has a few things it approaches with a collective passion verging on religiosity. These include football fanship (the European kind), alcohol (any old kind), dry wit as a proxy for emotion and cured, fried pig fat squished between white bread.

While the first three have a host of well-documented attendant dangers, it appears the bacon sandwich, that class-vaulting culinary staple for the ages, may prove the most dangerous by far. A new study released in the U.K. this month has found that British consumption of processed meat (meaning bacon, sausage, ham, mince or any meat that’s been salted, cured or chemically treated) can be blamed for an increased risk of early death, heart disease and cancer.  The findings were published in the journal BMC Medicine and are based on a study tracking the diet and lifestyle of almost 450,000 people in 10 European countries for an average of nearly 13 years. Admittedly, people who ate large quantities of processed meat were also more likely to smoke, drink heavily and have an unhealthy lifestyle.

Naturally, in my home, we are ignoring this study. As the old wartime poster says, we have resolved to “keep calm and carry on”—eating bacon, that is. As the columnist Suzanne Moore tweeted last week, most Britons would “rather die” than not have a bacon sandwich. Even the Guardian, that bastion of vegetarian liberal values, ran its own analysis in the wake of Bacongate, essentially telling readers to calm down; they probably weren’t going to drop dead from scarfing the occasional packet of pork rinds. And no less than the head of the nutritional sciences research division at King’s College London raised doubts about the study. “Tobacco use is such an enormously potent factor that it contaminates the findings,” professor Tom Sanders pronounced. His point is that while the researchers may have thought they were controlling for tobacco, the fact that most of the baconaholics were also regular smokers is just too persuasive a factor to be adjusted for.

It’s just not cool to hate on bacon these days. Frankly, it’s off-trend. There’s been a cheap-meat renaissance here in recent years, spurred by the British-originated trend of “tip-to-tail” eating, which made it socially acceptable, even cool, to consume vast amounts of pork belly, blood pudding and pig face—so long as it’s prepared by a famous chef at a very expensive east London restaurant. “In the midst of all this, it’s important to remember human life expectancy is rising all the time,” he pointed out. Besides, he added, “If you’re the sort who bothers to read the news of these reports, you’ve probably got a balanced diet anyway. And if you’re the sort who eats processed meat on pizza five times a week, then the bacon is likely the least of your problems.”