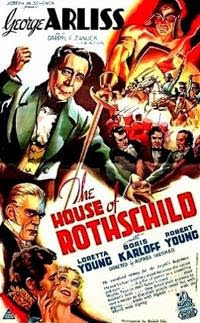 A 1934 movie with all the ambience of a horror film, including Boris Karloff, "The House of Rothschild," provides well-worth viewing to become familiar with beginning of Rothschild banking. Rothschilds remain a force still felt behind current impending worldwide financial collapse. You Tube provides plot summary: "
The film begins at the home of Mayer Amschel Rothschild (1744-1812) and his wife Guttle Schnapper (1770–1812). As one of their sons sees the taxman coming, they hurry and hide their wealth, including currency, silver, etc. However, the taxman finds some of it hidden in the basement, and decides to charge Rothschild less than the amount due, but keep the money with him. Later, as Mayer Amschel Rothschild is lying on his deathbed, he instructs his five sons to start banks in different countries across Europe: Amschel Mayer Rothschild (1773-1855) in Germany, Salomon Mayer von Rothschild (1774-1855) in Austria, Nathan Mayer Rothschild (1777-1836) in England, Carl Mayer von Rothschild (1788-1855), and James Mayer de Rothschild (1792-1868) in France. As they fund the Napoleonic Wars of 1803–1815, they aim to gain respectability from the European nobility, who shuns them and refuses to treat them as equals because they are Jews. However, at the end of the film, they have attained respect and dignity thanks to the power of money." The highlight of Rothschild secret cabal how they capitalized on Napoleon's defeat at the Battle of Waterloo by knowing a full day aheead of traders back in London Wellington had been victorious - or is this anti-Semitic hype? The real horror - Rothschild banking and wealth - remains with us today! Please drop below fold to view Rothschild family banking story!