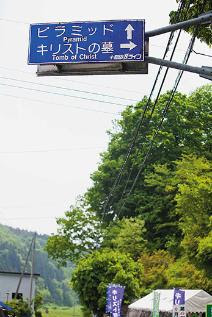 The Little-Known Legend of Jesus in Japan

from Smithsonian.com: "On the flat top of a steep hill in a distant corner of northern Japan lies the tomb of an itinerant shepherd who, two millennia ago, settled down there to grow garlic. He fell in love with a farmer’s daughter named Miyuko, fathered three kids and died at the ripe old age of 106. In the mountain hamlet of Shingo, he’s remembered by the name Daitenku Taro Jurai. The rest of the world knows him as Jesus Christ.

It turns out that Jesus of Nazareth—the Messiah, worker of miracles and spiritual figurehead for one of the world’s foremost religions—did not die on the cross at Calvary, as widely reported. According to amusing local folklore, that was his kid brother, Isukiri, whose severed ear was interred in an adjacent burial mound in Japan.

A bucolic backwater with only one Christian resident (Toshiko Sato, who was 77 when I visited last spring) and no church within 30 miles, Shingo nevertheless bills itself as Kirisuto no Sato (Christ’s Hometown). Every year 20,000 or so pilgrims and pagans visit the site, which is maintained by a nearby yogurt factory. Some visitors shell out the 100-yen entrance fee at the Legend of Christ Museum, a trove of religious relics that sells everything from Jesus coasters to coffee mugs. Some participate in the springtime Christ Festival, a mashup of multidenominational rites in which kimono-clad women dance around the twin graves and chant a three-line litany in an unknown language. The ceremony, designed to console the spirit of Jesus, has been staged by the local tourism bureau since 1964.

The Japanese are mostly Buddhist or Shintoist, and, in a nation of 127.8 million, about 1 percent identify themselves as Christian. The country harbors a large floating population of folk religionists enchanted by the mysterious, the uncanny and the counterintuitive. “They find spiritual fulfillment in being eclectic,” says Richard Fox Young, a professor of religious history at the Princeton Theological Seminary. “That is, you can have it all: A feeling of closeness—to Jesus and Buddha and many, many other divine figures—without any of the obligations that come from a more singular religious orientation.”

In Shingo, the Greatest Story Ever Told is retold like this: Jesus first came to Japan at the age of 21 to study theology. This was during his so-called “lost years,” a 12-year gap unaccounted for in the New Testament. He landed at the west coast port of Amanohashidate, a spit of land that juts across Miyazu Bay, and became a disciple of a great master near Mount Fuji, learning the Japanese language and Eastern culture. At 33, he returned to Judea—by way of Morocco!—to talk up what a museum brochure calls the “sacred land” he had just visited.

Having run afoul of the Roman authorities, Jesus was arrested and condemned to crucifixion for heresy. But he cheated the executioners by trading places with the unsung, if not unremembered, Isukiri. To escape persecution, Jesus fled back to the promised land of Japan with two keepsakes: one of his sibling’s ears and a lock of the Virgin Mary’s hair. He trekked across the frozen wilderness of Siberia to Alaska, a journey of four years, 6,000 miles and innumerable privations. This alternative Second Coming ended after he sailed to Hachinohe, an ox-cart ride from Shingo.

Upon reaching the village, Jesus retired to a life in exile, adopted a new identity and raised a family. He is said to have lived out his natural life ministering to the needy. He sported a balding gray pate, a coat of many folds and a distinctive nose, which, the museum brochure observes, earned him a reputation as a “long-nosed goblin.”

When Jesus died, his body was left exposed on a hilltop for four years. In keeping with the customs of the time, his bones were then bundled and buried in a grave—the same mound of earth that is now topped by a timber cross and surrounded by a picket fence. Though the Japanese Jesus performed no miracles, one could be forgiven for wondering whether he ever turned water into sake.

This all sounds more Life of Brian than Life of Jesus. Still, the case for the Shingo Savior is argued vigorously in the museum and enlivened by folklore. In ancient times, it’s believed, villagers maintained traditions alien to the rest of Japan. Men wore clothes that resembled the toga-like robes of biblical Palestine, women wore veils, and babies were toted around in woven baskets like those in the Holy Land. Not only were newborns swaddled in clothes embroidered with a design that resembled a Star of David, but, as a talisman, their foreheads were marked with charcoal crosses.
The museum contends that the local dialect contains words like aba or gaga (mother) and aya or dada (father) that are closer to Hebrew than Japanese, and that the old village name, Heraimura, can be traced to an early Middle Eastern diaspora. Religious scholar Arimasa Kubo, a retired Tokyo pastor, thinks Shingo may have been settled by “descendants of the ten lost tribes of Israel.”

As if to fuel this unlikely explanation, in 2004, Israeli ambassador Eli Cohen visited the tombs and dedicated a plaque, in Hebrew, to honor the ties between Shingo and the city of Jerusalem. Embassy spokesman Gil Haskel explained that while Hebrew tribes could have migrated to Japan, the marker was merely “a symbol of friendship rather than an endorsement of the Jesus claims.”

Another theory raises the possibility that the tombs hold the bodies of 16th- century missionaries. Christian evangelists first came to Japan in 1549, but bitter infighting for influence and Japanese converts led to a nationwide ban on the religion in 1614.

Believers went underground, and these Hidden Christians, as they are called, encountered ferocious persecution. To root them out, officials administered loyalty tests in which priests and other practitioners were required to trample a cross or an image of the Madonna and the baby Jesus. Those who refused to denounce their beliefs were crucified, beheaded, burned at the stake, tortured to death or hanged upside-down over cesspools to intensify their suffering. For more than 200 years, until an isolated Japan opened its doors to the West in 1868, Christianity survived in scattered communities, which perhaps explains why Shingo’s so-called Christian traditions are not practiced in the rest of the region."