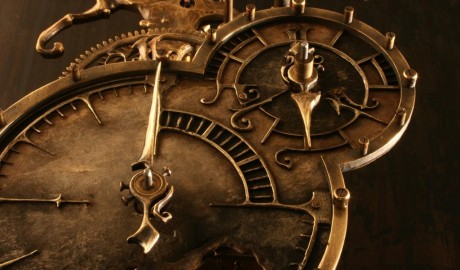 from thesleuthjournal.com: Have you read The Time Machine?  It’s a novella–a short novel–written by H. G. Wells in 1895.  You may have seen the movie, which is a sort of 1960’s sci-fi horror kind of thing.  The story has a young scientifically-minded man build a time machine and then go off into the future.  When he arrives he finds a beautiful, pastoral world populated with thin, passive, willowy people who are ignorant of machinery or writing or any kind of industrial advancement, and are terrified of the dark.  The scientist discovers that there is another race of beings below the surface of the world.  This ape-like, violent group runs the inner machinery of the world in a dark underground and lives off of the raw bodies of any surface beings it can catch during the night.  At the end of the novella the scientist moves further into the future observing the gradual end of the human or humanoid race and the devolution into crustaceans and primordial slime.  The end.

H.G. Wells was a Fabian socialist and wrote the story as an allegory for the control that the capitalists had over the workers.  He believed that the exploitation of workers by big industrialists destroyed both the worker class by creating dependence, and the industrialist owners by making them more bloodthirsty for profits.  As a socialist, Wells broke with the slow-moving Fabians and pressed for a one world government that would provide for all of the needs of the population.  In the 1920’s and 1930’s Wells was a committed Eugenicist who believed that the sterilization of inferior, sub-standard people would be a betterment for society as a whole.


As you read The Time Machine it’s interesting to view it as a commentary on those who would run the world—the so-called capitalists who lose their humanity while extracting all of the value they can from their ‘inferiors.’  So what is the relevance to UN Agenda 21?  Wells, a Fabian socialist, believed that society should be remade in a utopian model and that the new man would be superior, intelligent, unselfish, and concerned with society as a whole rather than himself as an individual.  He later had a vision of socialism in a non-Marxist structure that would improve on the Stalinist model.  This point of view–that the socialist model can be improved on so that the perfect man / mankind / society can be developed–is still alive now.  Masquerading as education or as social justice or as social equity, the development of the New Man is being shoved at us worldwide.

In fact the NEW MAN is a corporatocracy-created blueprint for the perfect employee.  The joke is that  NAFTA, WTO, TATA, TTP etc. are designed to destroy worker-confidence and long range personal financial security for the average employee in an industrialized society while protecting the Mega-Corporations.  The educational system is used as the vehicle for preparing the consciousness of the pliable New Man. The educational system is mainly that–a system–and is used for the assessment, monitoring, and rating of human beings while providing them with the minimum of information.  Computer technology has made possible the surveillance of all human activity, and the management of all exchange.  The flypaper of the internet allows for the free exchange of information at the true cost of privacy.  The system itself is run as a quasi-military operation cloaked in stealth while maintaining a mask of concern and transparency.

The New Man is lulled into a new poverty, a soft poverty of government subsidies and legal narcotics.  Marijuana is the perfect New Man drug: lack of initiative, passivity, and acceptance of boredom are desirable qualities for a large group of what could potentially be a dangerous Resistance.  Those who are able to run through the gauntlet of the educational system will be crippled by massive school debt while they remain in the safe cocoon of higher and higher degrees in Sustainable Development indoctrination.  The New Man marries late, becomes an adult at 30, is bowed by debt, lives with parents or room-mates, and stumbles into the global economy in a numb state.  Few of the New Men are free to disagree, to resist, to speak out, to stand up—they are paid by government, by major corporations, by corporate-backed non-profits and foundations.

In The Time Machine we see the image of the future, if we allow it.  We can break this passivity by refusing to volunteer for non-profits, foundations, and groups that spout the New Man philosophy.  Refuse to round up your grocery bill to contribute to some unknown non-profit.  Leave your church if your pastor preaches Sustainable Development.  Refuse to donate money to environmental non-profit groups.  Think.  Distribute flyers, books, and information that clearly identify who is manipulating your city.  Take action locally.  Make it your hobby.  It is your life, your money, your family, your future; whatever you believe is important is at stake here.  In just the last few years you have had full confirmation of the surveillance state and the takeover of your government.  Ask yourself if there is anything that would get you off of the couch.  Ask yourself why you are so passive.  Look at the time you spend on popular culture and ask yourself why you would rather watch TV than act in your own interest.
RESIST.  LIVE.   No one will rescue you.  Make a commitment to expose Sustainable Development, the action plan for the 21st century. Awareness is the first step in the Resistance.  Action is the second step.