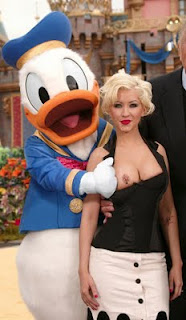 Walt Disney is remembered best for the "Wonderful World of Disney" program and wholesome television.  Many parents still refuse to see hints of perversion in sprawling Disney entertainment empire.  A blog entry,"The Perverted Disney Empire," at The Conspiracy Zone, presents several examples that should raise suspicions in any supervising adult, e.g., Donald Duck exposing Christina Aguillera's breast (picture)!  The Donald Duck ride outside stores, where duck's bill points directly at rider's crotch!  How did this come about?

The Conspiracy Zone adds further examples, phallic symbols embedded in Disney advertising, a candy that resembles genitalia and Disney brand unwholesome underwear! It seems clear, there's another side to Disney that's not what it appears! You can see more images and examples below.