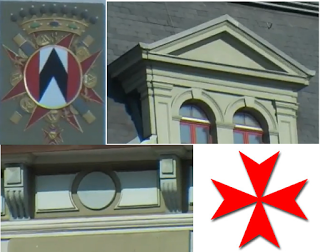 A fascinating historian takes viewers on guided tour in 2011 of occult Switzerland.  Our guide decodes in first minutes Spietz castle near Thun, revealing Knights Templar sign (picture, upper left) that can also be seen on "American and Israeli tanks in Iraq."  Guide shares wisdom about mercenary tradition behind Swiss state, in simple terms, how Swiss mercenaries/peasants would return home by August to take in year's harvest after plundering remainder of Europe.  Historian makes obvious origins of country in You Tube summary:

"... the last stronghold of the Templars Accon fell [fall of Acre] on [M]ay 18th 1291, only 2 and a half months later Switzerland was founded on [A]ugust 1st 1291 - the time to get back on horseback in those days. So the Templar`s treasure was hidden in Switzerland, with which the [S]wiss banks were founded and all wars were being financed by ever since - and out of the templars came the freemasons. The Pharaohs are still there and are ruling the world through secret societies - 'and the Pharaoh and his army disappeared in the sea' . . . the sea of peoples that is, through mixing they are amongst us on all key positions, and Switzerland is their biggest base; the home of the Templars. This is why their flag shows a simplified Templar`s flag [picture, bottom right of templar cross very similar to Swiss flag] in exactly the same colours."

Templar flag represents a fold out pyramid, according to historian.

A tour of Templar Chapel at Spietz castle ensues, its secret chamber where child sacrifice took place - every bit as fascinating - as Rosslyn Chapel.  The symbolism of "IHS," according to guide, represents "Isis, Horus and Seth." A part of Swiss history not widely known, includes child slavery up until 1980s.  Surprise, surprise - authorities' behavior in Switzerland removing children from homes reminiscent of child protective services in United States.

Our guide then tours city of Thun to share how Pharaonic strains of "humankind" use secret signs to help recognize each other.  The elite are so interbred throughout society, it's explained, there's problems identifying even one of their own!  Masonic/Pharaonic pyramid over windows (picture, upper right) and Sun glyphs (picture, lower left) represent Pharaonic signs, explains guide.  Acacia tree symbolism represents "the joining" or togetherness and Swiss itself  "Sisters of Isis."  Perhaps, most esoteric reference, our guide observes Ethiopian holiday Enkutatash ,  still celebrated on 9-11 each year by Freemasons as well as Ethiopians!  You have to view first half hour to find out historian's interpretation of America - what it means in his view.   You may continue for an additional hour with gifted historian and tour guide of occult Switzerland below.