The Polarizing Practice of Eating Horses 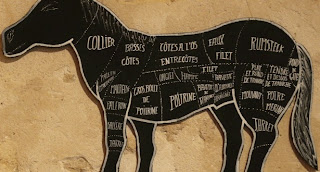 from theatlantic.com: Everyone who seriously studies French or Italian food on scholarly (gluttonous) research trips eats horsemeat. Most every village in France, particularly the southwest and northern border regions with Belgium, and in Italy, particularly the northeast around Verona and Venice, will have a butcher shop specializing in horsemeat, marked with disconcerting gilded horseheads over the shop windows revealing trays of bright lean red meat. Anyone who visits Eastern Europe, especially the Stans, is likely to be used into a restaurant whose specialty is horse cuisine. It's a rite of passage, like watching a pig slaughter and eating fresh blood pudding right afterward.
So I've had horse tournedos, horse sausage, and horse ragu. Several times. For reasons I'll explain, I wasn't eager to continue this line of exploration. But given the recent storm in the media over tainted burgers and ground beef in Europe and possibly all over Europe, I did look further into why eating horse, a seemingly archaic custom that should have died along with other staples of the paleo diet, has persisted.

First, for catchup on what the discovery of horse DNA implies about food safety and what corrective measures might ensue, see Marion Nestle's chronological links. For a good summary of the media's reaction, see Jack Shafer's column (and the Dish debate it provoked).
Shafer was quick to see the main point: this is news because of cultural taboos and the big ick factor of eating animals to which we ascribe -- that is, willfully project -- personality and character. It's a sharper, more painful, but similar reaction to anyone who encounters a restaurant or, worse, butcher selling dog meat in China.

Avoidance of horse is as ancient as it is inconsistent. Greek butchers sold it as cheap meat, according to the Grande Enciclopedia Illustrata Della Gastonomia, edited by Marco Gotti Guarnaschelli. The early Catholic church, according to the Penguin Companion to Food,
banned horsemeat likely because of its association with pagan sacrifice
and ritual eating; it is unkosher as horses aren't ruminants and don't
chew their cud; Muslims ban it, possibly because horses were luxury
animals in oases (though all theories about emotional attachment to
animals' enjoining their consumption should be looked at with
suspicion); Hindus also proscribe it. Yet prehistoric Europeans ate horse, and barbaric tribes did too,
probably because it was an efficient way to dispose of old or limping
animals. And horse is the original steak tartare, named for the horsemen
of Genghis Khan, possibly because horsemeat doesn't spread either
tuberculosis or tapeworms and was thus safer to eat raw than other kinds
of meat and fish. It is also leaner and higher in protein and iron than
some other red meats -- and much cheaper, which led to its promotion as
a health food for the working class.