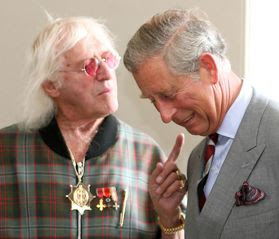 The Prince And The Pedophile

Brandon Turbeville asks questions long dismissed in appropriately titled article, "The Prince And The Pedophile."  Turbeville points out in spreading British pedo-scandal, Prince Charles has long enjoyed a pass as "beyond reproach" just as Jimmy Savile enjoyed, which now appears misplaced trust!  The present writer views summary dismissals of allegations as a long employed tactic by those in charge to stem further scrutiny.  Turbeville willingly breaks our rose colored glasses, so readers face reality of predatory pedophilia in British society, leading to very doorsteps of British royalty,  "...although the official line is that Savile and Charles met in the 1970s as part of the coincidence of mutual charity work, Savile himself has stated that he was friends with the Royal family 'for a million years.' In fact, it was reported that Savile actually stated he was introduced to the Royals in 1966 by Lord Mountbatten, a known pedophile and sexual pervert. In addition to Mountbatten, however, Greg Hallett, in his book Hitler Was A British Agent, also names Prince Philip as a pedophile...we have Savile, a notorious pedophile linked to other individuals of the Royal Family named as pedophiles as well. Prince Philip, of course, is Prince Charles’ father. Lord Mountbatten is largely considered Charles’ mentor."  Would Turbeville's story be better titled , "The Princes and the Pedophile?"

Savile filled role of introducing young victims, over the years, to idle rich for their illicit enjoyment. An uncouth Savile could be excused for his generally repulsive manners as just part of his television persona or "character!"

Turbeville concludes what seems only obvious:

"Savile was indeed close to British Royals as well as other elites for many years. It seems his qualification for such high connections were mainly due to his ability to obtain children for the twisted appetites of those considered beyond reproach for the mainstream media and, unfortunately, the general public.  Essentially, it is clear that Jimmy Savile was a procurer of children not only for himself but also for wealthy pedophiles all across the world, particularly in Britain. Even Savile’s own nephew has recently gone public with information tying Savile to a network of pedophiles and sick sexual parties where children were repeatedly raped. Guy Marsden, Savile’s nephew, also stated that the parties were attended by household names in show business."

For skeptics, Turbeville writes "...those who may still be under the impression that pedophilia is a crime beyond the capabilities of British politicians, take a look at this partial compilation of British politicians convicted of pedophilia in recent years."  The present writer exposes this grim degeneration with a heavy heart, and wishes, it weren't so! Pedophilia represents a blatant disregard for most of society, by a few, who believe they are above any kind of self-control! The sexual exploitation of young people represents base behavior, at best, barbaric and uncivilized and subhuman at its worst!