The Secret History of the Jazz Greats Who Were Freemasons 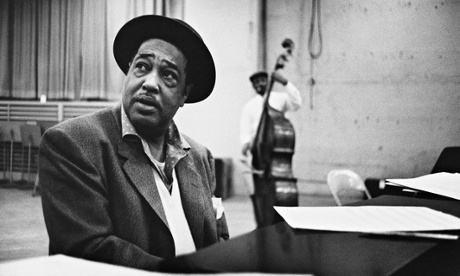 from theGuardian.com: When the City of London festival found out about a long dormant masonic temple that had been uncovered next to Liverpool Street station, it seemed obvious that this wonderfully opulent hall should be used as a one-off music venue. The only question was – what music should it host?

“The obvious choice would have been to host a Mozart recital, because everyone knows that Mozart was a freemason,” says Paul Gudgin, former director of the Edinburgh Fringe and now director of the City of London Festival. “But it just so happened that I was reading a biography of Duke Ellington which mentioned, in passing, his membership of a masonic lodge. I found it astonishing that such an anti-establishment figure turned out to be at the heart of an establishment organisation. And I thought it would be a perfect place to pay tribute.”

This month, the City of London Festival will host two Duke Ellington tributes in this elaborate, neo-classical masonic temple, now in the basement of the Hyatt group’s Andaz hotel. Saxophonist Tommy Smith plays on 4 July, and pianist Julian Joseph on 11 July.

“It’s something of a badge of honour to hear that Ellington was a mason,” says Joseph. “Not only was he part of a musical elite, but he had managed to enter this secretive and powerful organisation, one that only the privileged few had access to.”

Start digging into the history of freemasonry and you discover that Ellington was just one of many renowned African-American musicians to be inducted into its mysterious world. He was joined by the likes of Nat King Cole, WC Handy, Dizzy Gillespie, Count Basie, Lionel Hampton and Paul Robeson.

“Throughout history, freemasonry has attracted musicians,” says Martin Cherry, librarian at the Museum of Freemasonry in London. “Mozart is the obvious example, but in 18th-century London, a lodge was established called the Lodge of the Nine Muses, which attracted a number of European musicians and artists, including JC Bach. For musicians and artists who were new to a city, the lodge would have been an opportunity to meet fellow artists and network with people with whom they may be able to find work.”

The same applied two centuries later, across the Atlantic. “Musicians often led an itinerant lifestyle,” says Cherry. “Belonging to an organisation that had lodges all over a country could help ease the slog of life on the road, particularly in such a vast country as the US.

“Freemasonry was also charitable towards its members when they fell on hard times, looking after them when they were sick or paying for their funeral. Mozart’s funeral, famously, was paid for by his lodge, and there’s evidence that freemasons paid for the funeral of the blues musician Mississippi Fred McDowell – there are images of his open coffin which show him wearing his masonic regalia.”
Many white jazz musicians and bandleaders were freemasons, including Glenn Miller, Paul Whiteman, George Gershwin and Irving Berlin, as were many country & western stars. But, like so much in American life, freemasonry was segregated, with American masonic lodges split along colour lines.

Black freemasonry dates from before the American war of independence, when a freed black abolitionist and leather worker by the name of Prince Hall (1735-1807) was refused admittance to the St John’s masonic lodge in Boston, Massachusetts. Undaunted by the rebuff, Hall and 14 other free black men were initiated into freemasonry in 1775 by a British military lodge based in Boston.

In 1784, after the British had left America, the grand lodge of England issued Hall with a charter to set up an African lodge in Boston. It proved so popular that Prince Hall was granted the status of provincial grand master, allowing him to set up two further African masonic lodges in Philadelphia and Rhode Island.

Over the next two centuries, Prince Hall freemasonry snowballed across the United States, becoming the world’s largest fraternity for black men. By the middle of the 20th century there were lavish Prince Hall masonic temples around the country – from Los Angeles to Washington DC, from Seattle to Madison, Wisconsin.

By 1900, Prince Hall masonry had become a forum for politicised African-Americans, with Booker T Washington (1856-1915) and W.E.B. Du Bois (1868-1963) serving as active members. Throughout the 20th century, many key figures in the civil rights movement were attracted to freemasonry. The father of Martin Luther King Jr – Martin Luther King Sr (1900-84) – was a member of the 23rd lodge in Atlanta, Georgia. Medgar Evers, the National Association for the Advancement of Colored People (NAACP) activist who was assassinated in 1963, was a 32nd-degree freemason in Ancient & Accepted Scottish Rite, Southern Jurisdiction. Alex Haley (1921-92), the writer of Roots and biographer of Malcolm X, was a 33rd-degree mason in the same order. Thurgood Marshall (1908-93), the first black member of the US supreme court, was supported by his Prince Hall lodge in Louisiana. The comedian Richard Pryor (1940-2005) joined a lodge in Peoria, Illinois, while actor and activist Ossie Davis (1917-2005), Paul Robeson (1898-1976) and the boxer Sugar Ray Robinson (1921-89) were all active Prince Hall masons.

“Like all freemasonry, Prince Hall freemasonry does tend to have a middle-class appeal,” says Cherry. “The many Prince Hall visitors to the Masonic Library and Museum in London are often doctors, lawyers or skilled artisans, and a lot of them have a military background. Some join because their family were members; some think it’s a good way of networking. Some like the comradeship and the social aspects; others like the ritual and the regalia.”

As well as being a networking institution, freemasonry might also have had a philosophical appeal to many politicised African-Americans. The mysterious tenets of freemasonry include gnostic texts, references to ancient Egypt and alternative interpretations of the Bible. Prince Hall lodges thus became a forum where pre-Christian knowledge could mix freely with black liberation theories and remnants of African religions. 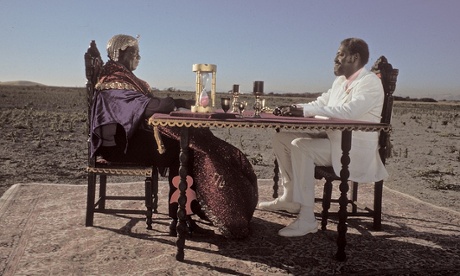 Mason and Egyptology fanatic Sun Ra plays cards with the overseer in the 1974 film, Space is the PlaceWhen the Afro-Guyanese historian George GM James (a Prince Hall mason and professor at the University of Arkansas) wrote his influential 1954 book Stolen Legacy: Greek Philosophy Is Stolen Egyptian Philosophy, he made explicit the connections between freemasonry and Egyptology. For James, Egypt was “the cradle of the mysteries and of the masonic brotherhood”, while the Greek philosopher Socrates was merely a “master mason” and “a brother initiate of the Egyptian Mysteries”.

The most obvious musical manifestation of this is Sun Ra. Born Herman Sonny Blount in 1913, Sun Ra seems to have hidden in plain sight as a freemason throughout his career. He performed regularly at a masonic temple in his home town of Birmingham, Alabama, and – according to his biographer John Szwed – was a regular at Birmingham’s masonic library, one of the few places in the city where African-Americans had unlimited access to books. Indeed, Sun Ra’s trademark stage garb is based on masonic cloaks and aprons (his ceremonial robes in the 1974 film Space Is the Place were borrowed from a Prince Hall lodge in Oakland, California), while – as the writer Kodwo Eshun suggests – his obsession with Egyptology shares much with freemasonry. 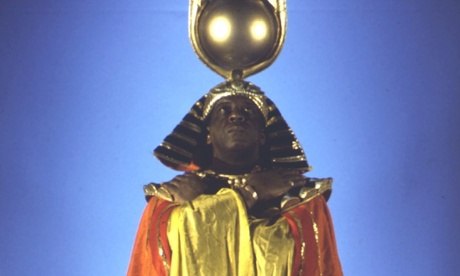 Sun Ra in the film Space is the Place“Although Sun Ra had links to the masons,” says Cherry, “there’s no evidence that he was ever a member of a particular Prince Hall lodge.” Cherry thinks it likely that Sun Ra was a member of a fraternal order called the Knights of Pythias, another secretive organisation who meet in lodges, and who also claim Louis Armstrong as a former member. Likewise, Dizzy Gillespie is not listed as being a Prince Hall lodge member, but his autobiography talks about his fascination with freemasonry and his application to join a masonic lodge.

It appears that Prince Hall freemasonry’s popularity is past its peak, with the average age of members increasing rapidly and fewer young African-Americans joining. There are, however, numerous stories suggesting that the likes of Jay-Z, Nas and Kanye West are freemasons. Martin Cherry thinks we should take these stories with a pinch of salt.

“The internet is full of rumours about hip-hop artists who are freemasons,” says Cherry. “My favourite is that Lil’ Kim is a member of the Eastern Star, an order for the wives of freemasons. Most of these rumours are on anti-masonic sites or anti rap music sites that are trying to make connections between freemasonry, hip-hop and the occult.

“I’m sure that if any high-profile hip-hop artists had become freemasons, the lodge that initiated them would have made something of it,” he says. “Like when basketball star Shaquille O’Neal was made a mason at sight by the grand master of the Prince Hall grand lodge in Massachusetts.”
Shaq joins a noble lineage – not just George Washington and Oscar Wilde, or Mozart and Buzz Aldrin, but a list of African-American royalty that includes Sugar Ray Robinson and Don King, Paul Robeson and Duke Ellington.