The Spear Of Destiny 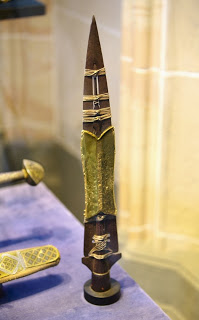 The Spear of Destiny remains a talisman with mystical powers in many minds.  Clyde Lewis, host of Ground Zero Live, takes on fascinating subject with an interview of researcher Ralph Epperson.  Lewis writes also accompanying article, “Zero Hour:  The Secret Of The Spear Of Destiny.”  The belief in the mystical power of the Holy Lance, AKA Spear of Destiny, Lance of Longinus has been held by many famous figures in history: “Constantine the Great, the Roman Emperor who had legalized Christianity. Theodosius, Alaric who sacked Rome, Theodoric who turned back Attila the Hun, Justinian, Charles Martel who had defeated the Muslims at the Battle of Poitiers, Charlemagne, Frederick Barba- rossa and Frederick II, and others as well.” Mystical powers of the sword seem to be double-edged however:  “…these great conquers also paid the consequences for having this artifact in their possession. Charle- magne had kept the spear with him throughout 47 victorious battles and had only died when he accidentally dropped it. Barbarossa, like Charlemagne, died within minutes of dropping it as he crossed a stream.” The present writer suspects supernatural belief in the spear’s power, will persist, as long as Mankind remains intact  The Ground Zero host intertwines how short-lived series “Zero Hour,” secret societies and artifacts, possibly revealed too much, resulting in exceptional cancellation after just three episodes.  Lewis also relates Adolf Hitler’s initial encounter with the talisman at a Vienna museum from Mein Kampf, when a tour guide revealed: “There is a legend associated with this spear that whoever claims it, and solves its secrets, holds the destiny of the world in his hands for good or evil.”  There are doubtless many who will use any means to gain an edge in battle!   Adolf Hiter committed suicide shortly after General George S. Patton took possession of the Spear Of History for the United States and control over its mystical powers.  Did Hitler need to escape a fate worse than death?