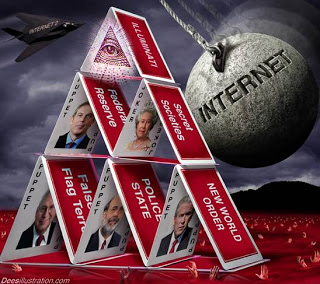 The War Is Over … And We Won

Zen Gardner senses in recent blog, "The War Is Over … And We Won." Gardner believes we've been at war with tyranny since 1913 creation of Federal Reserve System.  The Dees' picture (left) symbolizes internet as wrecking ball that fells totalitarian house of cards in Gardner's estimation.  Gardner describes war we've already won below:

"The war I’m talking about is the war between individuals and the state. You see, governments have already lost. They just don’t know it yet. There has been a war going on between collectivizing, coercive government and the allied forces of individualism, freedom and markets for quite some time...I understand if when I say that government has lost the war, you might think I’m crazy. After all, things look pretty bleak. Yes, the government is out of control in the US and in many other countries. But their actions are more like death throes. Like a big, mortally wounded beast, the state is lashing out with the strength and ferocity that comes from panic. It senses death approaching. And that may make it temporarily more dangerous."

The present writer senses same phenomena, also agrees, like an old lion after losing its territory, may be quite dangerous still able to inflict damage even in decline!  The powers in place didn't get there by giving up easily!  Hopefully, we'll survive last gasps of formerly preeminent beast!