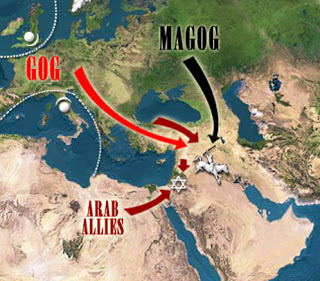 The War Of Gog And Magog

What are Gog and Magog?  They are names but of individuals, regions or nations?  "Historically speaking, "Magog was a grandson of Noah (Genesis 10:2). The descendants of Magog settled to the far north of Israel, likely in Europe and northern Asia (Ezekiel 38:2).
Magog seems to be used to refer to 'northern barbarians' in general,
but likely also has a connection to Magog the person. The people of
Magog are described as skilled warriors (Ezekiel 38:15; 39:3-9)," informs gotquestions.org.   There exists some agreement on areas said to represent Gog and Magog as Europe and Northern Asia, although differing interpretations abound.  The War of Gog and Magog remains, likewise, open to interpretation.  The intent of this article serves to provide a framework for the events surrounding End Times, we hear so much about.

"Islam, Israel & Bible Prophecy," provides near complete summary of Biblical events. The complete article is available here (pdf), below, an article excerpt on War of Gog and Magog:

"In short, the battle Gog and Magog is war in the latter days (Last days) when a confederacy of nations attack Israel, which has been restored in the last days. These nations, which attack Israel in Ezekiel chapters 38 and 39, include nations, which are Muslim and have a clear animosity to Israel. Along with these Muslims nations, a northern kingdom, called Gog and Magog, which many identify, as the land Russia, will ally itself with Muslim nations, to oppose Israel in the last days.

This confederacy of nations comes against Israel, God, who through Ezekiel foretells the event, defeats them. This conflict establishes Israel and restores them to the land in preparation of their redemption. The conflict also reminds the world, why Israel went into captivity for the last two-thousand years.(Ezekiel 39:28).

The timing of this event, and what follows is an issue of debate by those who study Bible prophecy.

The battle of Gog and Magog is a seminal event in scripture. It is the transition to the time, known as the Day of the Lord, the Time of Jacob’s Trouble, the Tribulation Period. Scripture reveals the details to those who take the Bible literally."

You should read the above article if only for the summary of events from Biblical times to the present. A blog post provides reader with further detail, "How does Gog and Magog relate to Armageddon?" You may tend to lump all conflict together, but descriptions of events show reader they're not the same battle. The battle descriptions and its participants taken from the Bible are fascinating!