for a few years, i was a sound designer at the contemporary american theater festival. i also worked for ed herendeen, off & on, for almost ten years. i can say first hand that ed has always staged controversial plays; from the death of danny casolaro in 'the octopus' to sleeping with terrorists in 'homeland security,' his provocative choices make theater more urgent & important. that's one of the main reasons why people want to work with him... but now, with catf putting on 'my name is rachel corrie,' herendeen & co may have bitten off more than shepherdstown can chew...

should anti-israel play be staged?

from jewish theatre: A controversial one-woman play about an American killed in Gaza will be staged this summer during the Contemporary American Theater Festival (CATF) in Shepherdstown, W.Va., and some longtime ticket holders are objecting.

My Name is Rachel Corrie will be performed 17 times during the month long July festival.

Bethesda's Richard Belle has been attending the festival for the past 10 years. This season, he plans to skip it in protest.

"The play was written by partisans who are strongly anti-Israel," said Belle, 55, who works in marketing for a nonprofit engineering corporation. "I don't see this play doing anything except stirring up hatred against Israel, and the fact that it's so beloved by the hard anti-Zionist, pro-Palestinian movement is not coincidental," he continued.

"I'm particularly pained because I love CATF. I'm horrified in what they're doing," Belle said.

Such reactions don't surprise CATF director Ed Herendeen. "I think that's what is great about freedom of speech and the power of art is that you go and choose what you want to see," he said. "What I would like is people to keep an open mind."

One of CATF's board members resigned in protest, revoking a $100,000 pledge, Herendeen said. He would not reveal the name of that person, and other board members either could not confirm the identity or did not respond to inquiries.

He also said that he has been "receiving some real nice letters of positive support from patrons," and that as of press time ticket sales are roughly on pace with last year. 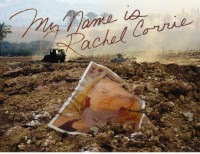 from shepherdstown observer: With the Contemporary American Theater Festival (CATF)’s decision to stage “My Name Is Rachel Corrie” during its 2007 season in July, the shouting match that has led to the play’s cancellation in New York, Toronto, and Miami and upstaged a recent production in Seattle could follow the play to Shepherdstown...

“It’s a very human story. I connected with this play because of Rachel’s idealistic voice,” says CATF producing director Ed Herendeen. “It reconnected me with my youth and my idealism.”

According to most press accounts, many of the play’s admirers share Herendeen’s perspective. The setting could have been Darfur, Liberia, or any of the world’s most dangerous and contested places. For Herendeen, Corrie’s voice rings with youthful optimism that people can make a difference in the world...

The decision to stage the play has created a stir within CATF. Early on, a few trustees hinted they might resign over the play’s content. Others were concerned by the negative financial implications of staging the play. The trustees met for a Saturday session to discuss the decision to produce the play. To Herendeen, the discussion was an energizing example of how theater can inspire dialogue. Ultimately, though, one trustee, H. Alan Young, did resign over the trustees’ decision to back the production.