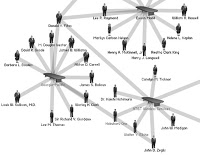 they rule the world

from washington post: Go to theyrule.net. A white page appears with a deliberately shadowy image of a boardroom table and chairs. Sentences materialize: “They sit on the boards of the largest companies in America.” “Many sit on government committees.” “They make decisions that affect our lives.” Finally, “They rule.” The site allows visitors to trace the connections between individuals who serve on the boards of top corporations, universities, think thanks, foundations and other elite institutions. Created by the presumably pseudonymous Josh On, “They Rule” can be dismissed as classic conspiracy theory. Or it can be viewed, along with David Rothkopf’s Superclass, as a map of how the world really works.

In Superclass, Rothkopf, a former managing director of Kissinger Associates and an international trade official in the Clinton Administration, has identified roughly 6,000 individuals who have “the ability to regularly influence the lives of millions of people in multiple countries worldwide.” They are the “superclass” of the 21st century, spreading across borders in an ever thickening web, with a growing allegiance, Rothkopf argues, to each other rather than to any particular nation.