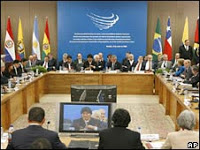 unions, currencies & the consolidation of power

from bbc: The leaders of 12 South American nations have formed a regional body aimed at boosting economic and political integration in the region. At a summit in Brazil, they signed a treaty which created the Union of South American Nations (Unasur). Brazil's President Luiz Inacio Lula da Silva said the move showed that South America was becoming a "global player".

from gulf times: South America is thinking of creating a common currency and a central bank along the lines of those in the European Union’s eurozone, Brazilian President Luiz Inacio Lula da Silva said yesterday. The idea is a logical next step following the signing last Friday of a treaty creating a Union of South American States that aims to promote joint regional customs and defense policies, Lula said during his weekly radio broadcast. “Many things still haven’t been realised. We are now going to create a Bank of South America. We are going to move forward so in the future we’ll have a single central bank, a common currency,” he said. But, he added: “This is a process. It won’t be something that happens quickly.”

from US state dept: The United States congratulates the African Union (AU) on the 45th anniversary of its establishment. On May 25, 1963, the Organization of African Unity (OAU) was established to act as a collective voice for the total liberation of Africa. Forty five years later, it continues promoting unity and solidarity. 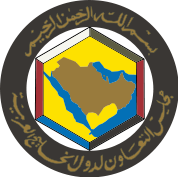 from steve watson: A report from Merrill Lynch & Co has revealed that the government has effectively given Gulf Arab oil producers the go ahead to change their dollar-pegged foreign exchange policies, a move some experts fear will lead to a large scale abandonment of the greenback. In a report entitled "U.S. Green Light for the Gulf Cooperation Council (GCC)", the U.S. investment bank said the United Arab Emirates and Qatar will probably move to a currency basket in the next few months, with their respective currencies appreciating 5 percent before the end of the year, reports Reuters.

you think nafta, cafta & the economy is bad now? wait...