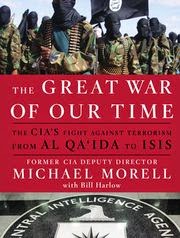 from usatoday.com: The Islamic State simply inspired the deadly assault by two men on an exhibit of cartoons depicting the prophet Mohammed near Dallas last week, CIA veteran Michael Morell says. But it's only a matter of time before the jihadist group is likely to be in a position to direct more elaborate attacks on American soil that could result in mass casualties.

"If we don't get ISIS under control, we're going to see that kind of attack," the kind of attack al-Qaeda launched on 9/11, Morell told USA TODAY. So far, U.S. efforts haven't been effective in countering the Islamic State's success in recruiting hundreds of American converts, he says, "and we're not effective at it because it's very hard to do."

Morell was by President George W. Bush's side at a Florida elementary school in 2001 when the president was told hijacked airliners had crashed into the World Trade Center, and he was in the White House Situation Room with President Obama nearly a decade later when the first word was relayed that Navy Seal Team Six had killed Osama bin Laden.

After 33 years in the CIA, including two stints as acting director, Morell has written an account of his experiences, published Tuesday by Twelve, titled The Great War of Our Time: The CIA's Fight Against Terrorism--From al Qa'ida to ISIS

His central point: This "great war," which already has tested the nation's national security and its politics, is likely to stretch for decades more. "For as far as I can see," he says.