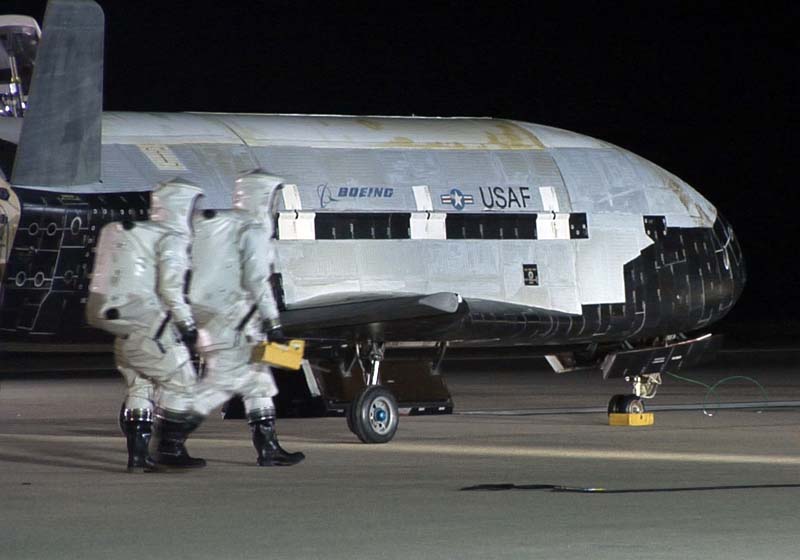 from abc.net.au: A top secret US military space plane has landed in California after almost two years in orbit above Earth. The unmanned X-37B, which is also known as the orbital test vehicle, was launched in December 2012 by the US Air Force. It was the space plane's third known and longest mission.
The
Air Force said the X-37B robotic space plane landed at Vandenberg Air
Force Base in central California on Friday, ending a classified 22-month
mission that marked the third in Earth orbit for the experimental
program.
The X-37B, a 9-metre winged craft that resembles a miniature NASA space shuttle, touched down at 9:24am (local time).
The
craft was carried into orbit for its latest mission aboard an unmanned
Atlas 5 rocket from Cape Canaveral Air Force Station in Florida on
December 11, 2012.
The spacecraft conducted unspecified experiments while in orbit, the Air Force said.

The space plane first flew in April 2010 and returned after eight
months. A second vehicle blasted off in March 2011 and stayed in orbit
for 15 months.

The Air Force said the orbiters, built by Boeing,
"perform risk reduction, experimentation and concept-of-operations
development for reusable space vehicle technologies," although details
of the missions are secret.

The Secure World Foundation, a non-profit group promoting
the peaceful exploration of space, said the secrecy surrounding the
orbital activities and payloads of the X-37B were almost certainly due
to the presence of national intelligence-related hardware being tested
or evaluated.

The Air Force is preparing to launch the fourth X-37B mission from Cape Canaveral in 2015.
Source: abc.net.au
h/t: @ethanTOTT