white house press corps plane detained in china
from ap: A charter airplane carrying the White House press corps was detained for nearly three hours Friday at Beijing's international airport not long after President Bush arrived to attend the Olympic Games. The flight crew of the Northwest Airlines 747 had been expecting to park at a VIP terminal, but after landing was instead directed by the control tower to a normal international gate. White House officials would say only there were "logistical problems" getting clearance to unload the aircraft. The flight crew was told the Chinese were insisting that all luggage be inspected.

relative of US coach killed in beijing

from washington times: A Chinese man stabbed the in-laws of the U.S. Olympic men's volleyball coach, killing one and injuring the other while they visited a Beijing tourist site near the main venue where Olympic competitions began Saturday. The victims were Todd and Barbara Bachman of Lakeville, Minn., parents of former Olympian Elisabeth Bachman, who is married to men's volleyball coach Hugh McCutcheon, according to the U.S. Olympic Committee. Bachman's father was killed.

heat & humidity taking toll on athletes at olympics
from mcclatchy: If it's not the smog, it’s the heat and humidity. The thick gray cap of haze over the Chinese capital abated slightly Saturday, but temperatures soared into the mid-90s, and some Olympic athletes wilted. Several cyclists pulled out of the road race, unable to cope with the sticky heat, and a Swiss men's beach volleyball team resorted to a medical break to catch a brief respite from the sizzling sun and the high humidity that just wouldn’t allow sweat to evaporate... Many athletes were worried less about heat than air pollution upon arriving in Beijing, one of the most polluted cities in the world. Microscopic particles that comprise the city’s thick haze can aggravate those who suffer from asthma, and irritate eyes and nasal passages. 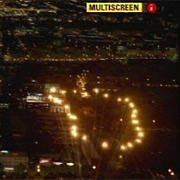 from sky news: Parts of the spectacular Beijing Olympics opening ceremony were faked, it has emerged. The global television audience of more than three billion people watched in amazement as a series of giant footprints outlined in fireworks proceeded through the night sky from Tiananmen Square to the Bird's Nest stadium - except they were watching a computer animation. Even the giant television screens within the stadium itself broadcast the fake images. Stunned viewers thought they were watching the string of fireworks filmed from above by a helicopter. But in reality they were watching a 3D graphics sequence that took almost a year to produce. It even included a 'camera shake' to mimic the effect of filming from a helicopter. The dupe was revealed by China's Beijing Times. Speaking to the paper, the man responsible for the animation said he was pleased with the result.

chinese defend olympic ceremony lip-synch
from msnbc: Chinese officials defended their decision to pass off the voice of a 7-year-old songbird as that of another girl at the Olympic opening ceremony, calling it a simple casting choice. Critics said it was a step too far in China’s obsession with the perfect Olympic Games.