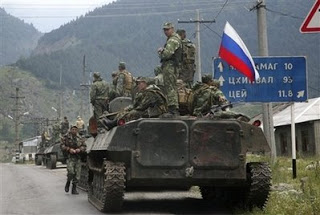 from paul joseph watson: Georgian forces, trained and equipped by the Pentagon and the U.S. government, killed 10 Russian peacekeepers early this morning in a provocation attack that has escalated into military conflict, but the subsequent corporate media coverage would have us believe that the U.S. and NATO-backed client state Georgia is a helpless victim, when in actual fact a far more nuanced geopolitical strategy is being played out.

Original reports early this morning detailed how Georgian forces had killed 10 Russian peacekeepers and wounded 30 others, which was the provocation for Russian forces to begin military operations, but the fact that Georgian forces were responsible for starting the conflagration has been completely buried in subsequent media coverage.

“Georgia and the Pentagon cooperate closely,” reports MSNBC, “Georgia has a 2,000-strong contingent supporting the U.S.-led coalition in Iraq, and Washington provides training and equipment to the Georgian military.”

Moreover, the very “Rose Revolution” that brought the Harvard trained pro-US Georgian president Mikhail Saakashvilli to power in 2003 was wholly aided and abetted by the Central Intelligence Agency.

russia's 'full scale invasion' of georgia
from danger room: "Russia has launched a full scale military invasion," Georgian President Mikheil Saakashvili said today in Tbilisi, Georgia's capital. Saakashvili is planning to withdraw Georgia's entire 2,000-men contingent from Iraq within three days to help repel the Russians, even as Saakashvili calls for "an immediate ceasefire" in a conflict that Russian officials claim has killed 2,000 and left 30,000 homeless.

The Russian defense ministry tells the New York Times that "100 planeloads of airborne troops" will be flown into the conflict zone - on top of the 2,500 troops already estimated to be in the country.

evidence of US military presence in georgia

10 video reports on conflict in georgia

did US & israel provocateur south ossetia conflict? does the sun come up in the morning?

from kurt nimmo: Dead civilians in South Ossetia. But you will not hear much about it on CNN or Faux News. Because they are too busy reporting ad nauseam about the extramarital shenanigans of CFR darling John Edwards.

“Russian officials believe that it was the USA that orchestrated the current conflict. The chairman of the State Duma Committee for Security, Vladimir Vasilyev, believes that the current conflict is South Ossetia is very reminiscent to the wars in Iraq and Kosovo,” reports Pravda, the Russian newspaper...

Let’s not forget America’s junior partner in chaos and mass murder, Israel. “In addition to the spy drones, Israel has also been supplying Georgia with infantry weapons and electronics for artillery systems, and has helped upgrade Soviet-designed Su-25 ground attack jets assembled in Georgia, according to Koba Liklikadze, an independent military expert based in Tbilisi. Former Israeli generals also serve as advisers to the Georgian military,” reports the International Herald Tribune.

No wonder the horrific photos emerging from South Ossetia have that Lebanon invasion look about them. Israel has over fifty years of experience in invading small countries and has consistently specialized in murdering and tormenting civilians.