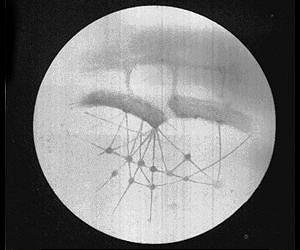 The Mars Reconnaissance Orbiter (MRO), mapping Martian surface the past five years, has captured images indicating water, according to article via Mars Daily! "Last August...scientists found dozens of slopes across the southern hemisphere of Mars where previously undetected dark streaks come and go with the seasons. When the planet heats up, the streaks appear and expand downhill, and disappear when it gets cold. Scientists think it may be evidence of melted, salty water running down slopes during the Martian summer." Could this be a revival of the canals of Mars a la Percival Lowell? The article gives a nod to the amateur astronomer, "...Lowell was far and away the most influential popularizer of planetary science in America." You can read one of Lowell's books by clicking link, "Mars and Its Canals" (1906). But, Lowell is excused at the same time for "...the fact that his 'canals' and elaborate descriptions of Martian civilization turned out to be the product of self-delusion (though not a deliberate hoax), Lowell's name remains honored in the annals of astronomy." The question arises in a reader's mind, whether Lowell was unfairly discredited?