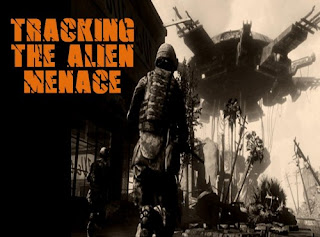 Is our government going to lengths to prevent knowledge getting out of alien satellites in our solar system? Clyde Lewis, Ground Zero Live host, implies in “Tracking The Alien Menace,” – beyond the given – we’re not kept informed, great efforts are taken to ridicule “…anyone who detects something anomalous that is closer to earth.” Lewis refers to recent anomaly revealed near planet Mercury, almost immediately dismissed by authorities as imaging artifacts. The talk show host sees a physical resemblance to the mysterious Black Knight Satellite, first spotted in 1960.

A Ground Zero Live November guest, Duncan Lunan is a scientist, who claimed he deciphered signals in the seventies from the mystery satellite.  Lunan said he no longer believes message he deciphered, contributed the following according to Lewis:

“Lunan spoke with us from his home in Scotland on 11-9-11and told us that according to reports that the Space Telescopes at Arecibo Puerto Rico were on alert. While Asteroid YU55 was passing overhead the radio telescopes were prepared for a communication attempt with an unknown force that was in our solar system. Lunan of course shot to some fame when he claimed to have deciphered radio communications dating back to 1927. These transmissions were coming from space probes in our Solar system. Probes that were not a product of NASA or any other country. It was believed that the probes have been carefully placed in our Solar system, Once again it conjured visions of the Black Knight probe and its mysterious transmissions and origins.”

The present writer agrees with Lewis, there is likely more to come. Is there something out there originating from Epsilon Bootis – or elsewhere – as Lunan and sci-fi writer Philip K Dick, once believed? Is it, possibly, step 4 of Project Blue Beam, a highly sophisticated psyop perpetrated upon humanity? You may download free John Keel’s “Disneyland of the Gods” here, who wrote about the Black Knight satellite. Is it time to consider, our home is under surveillance by agents elsewhere than our government?