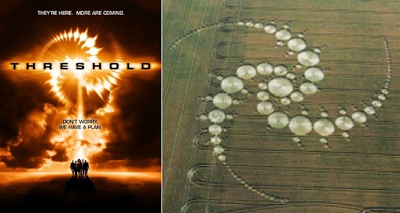 Bob Schlenker sees interesting clues in movie at The Open Scroll Blog.  Schlenker views, "Threshold," a 2005 TV series as providing viewers with hint how humanity will be deceived in a "transformation plot" that  converts Man into image of Satan instead of God.  "This show contains many of the signal elements of the transformation plot and presents them in an articulate manner. Links are established between the triskelion symbol [picture, right], a plot by aliens to transform humans into superhuman beings in their own image and triple helix DNA as the feature of such a transformed being. There is a scene that presents us with the concept of how reverse speech can help us discern the alien communication. In the wider context of Threshold there is a crop circle connection, with the featured triskelion symbol matching a crop sign that had appeared in 1996,"     observes Schlenker on multiple levels.

Threshold reveals "the how" a conversion of Man's DNA to a triple helix.  Schlenker also sees substitution of his (Satan's) in place of God's work as recognizably Satan's style.  Aliens as plotters in movie converges with many researchers, who believe UFOs are a manifestation of demonic entities.

"What I find most interesting about the series 'Threshold' is that it presents how higher dimensional non-human entities successfully transform humans into their own image by changing their DNA into a triple helix structure. While the show doesn't expose the truth of how this will happen... it does reveal how the transformation will come by changing DNA from a double to a triple strand structure. Another interesting element is how it presents the nature of this transformation as remaking us into the image of another that is not the Creator of Genesis 1:26, who said, 'Let us make man in our image, after our likeness.' Another element of significant interest is the recurring triskelion symbol that is said to be a fractal or mathematical representation of a triple helix DNA. This frequently recurring image is said during the show to be the alien's calling card...," Schlenker elaborating on three levels he sees confirmed:  1) DNA, 2) Satan's substitution and 3) Aliens.

"This show testifies loudly about the plot to transform double helix mankind into triple helix beastkind. Through occult symbols like the triskelion, spells of witchcraft can and are being cast that prepare human hosts for demonic conversion. While many movies and TV shows contain similar themes and elements, I know of no other that presents the great secret of the ages so openly as 'Threshold,' concludes Schlenker. Is it over-the-top or the Mark of the Beast?