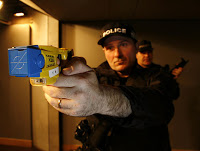 uk police can use tasers on kids

from daily mail: Police have been given the go-ahead to use Taser stun guns against children.

The relaxing of restrictions on the use of the weapons comes despite warnings that they could trigger a heart attack in youngsters.

Until now, Tasers - which emit a 50,000-volt electric shock - have been used only by specialist officers as a "non lethal" alternative to firearms.

However, they can now be used against all potentially violent offenders even if they are unarmed.

It is the decision not to ban their use against minors that is likely to raise serious concerns.

But he failed to mention Government advisers had also warned of a potential risk to children.

The Defence Scientific Advisory Council medical committee told the Home Office that not enough was known about the health risks of using the weapons against children.

Tasers work by firing metal barbs into the skin which then discharge an electrical charge which is designed to disable someone long enough to allow police to detain them safely.