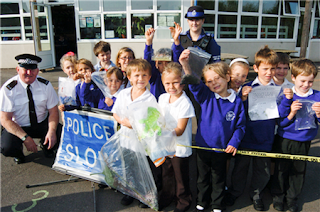 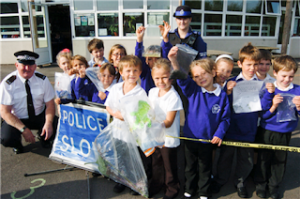 from dateline zero: There seems to be a growing trend among schools to stage a UFO crash, and then teach students how to react, as well as to “properly” investigate and report on the incident... The latest “UFO drill” took place Wed, Sept 29, at Sandford Primary School in the UK. The kids were treated to a full UFO crash scenario that included wreckage, police tape, and real police officers. (Perhaps it was only lacking men from the government telling the children not to talk about what was seen.) What’s interesting is that “police were on hand to show the children how to properly investigate the UFO crash site.” Um, were any of the officers speaking from experience? A news article at The Weston Mercury elaborates on the role played by the officers:

Teacher and organiser Victoria Shepherd said: “PCSO Wright and PC Church were brilliant. They helped the children secure the scene and talked about what to do in an emergency, how they gathered evidence, how to interview witnesses etc.”

Are UFO drills becoming something of a routine part of the curriculum in the UK? It’s certainly becoming more and more of a common event. Each time, it’s a joint exercise put in place by the school and local law enforcement. A similar drill took place in Feb of 2009 when Lanchester Endowed Parochial Primary, in County Durham, staged a surprise “crash” behind the school. In Sept 2008 “children from an Edgware school were made to believe aliens had landed in their playground by teachers and police.” Again, each time it was conducted by the school system and police — teaching children what to do in event of a UFO event. Afterward, the kids are asked to write about their experience.