from press association: Teachers warned of an "Orwellian" surveillance culture developing in schools as more classrooms are fitted with CCTV cameras to monitor pupils' behaviour. The Association of Teachers and Lecturers (ATL) voiced concern over how increased monitoring of lessons and pressure to get better exam results risks undermining the quality of education. 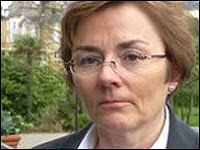 New school buildings are being fitted with cameras to make sure children can be caught if they misbehave, according to Julia Neal, president of the ATL. "They (cameras) are probably put in to monitor behaviour," she said, speaking at the ATL annual conference in Torquay. "But because they are there they can then be used in other ways as well." She predicted that by 2013, the Government's focus on test results and school league tables - combined with increased observation of lessons - could have "led to a world with Orwellian overtones... It might be a far-fetched notion that Big Brother will be watching over schools in the next five years, but you only have to listen to what ATL delegates talk about this week to see the current reality of an over-measured, over-monitored education system," she said.

from bbc: School-leavers should be encouraged to swear an oath of allegiance to Queen and country, says a report commissioned by Gordon Brown on British citizenship. Report author, ex-attorney general Lord Goldsmith, says it would give teenagers a sense of belonging... However, John Dunford from the Association of School and College Leaders said the citizenship ceremony was "a half-baked idea".