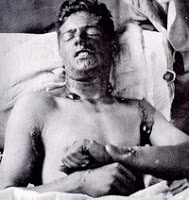 from ap/my way: British military scientists tested mustard gas on hundreds of Indian soldiers during more than a decade of experiments that began before World War II, a British newspaper reported Saturday.

The experiments to determine whether mustard gas damaged Indians' skin more than British soldiers' began in the early 1930s and lasted more than 10 years at a military site in Rawalpindi, now in Pakistan, The Guardian reported, citing newly discovered National Archive documents.

The tests caused large numbers of burns, some of which were so damaging the subjects had to be hospitalized, a 1942 report cited by the newspaper said.

"Severely burned patients are often very miserable and depressed and in considerable discomfort, which must be experienced to be properly realized," the report said.

The Ministry of Defense said it could not comment until Monday.