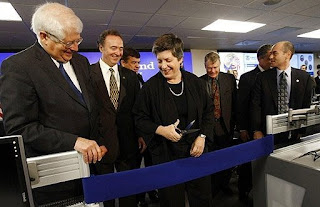 from newsweek: Congress and civil libertarians have always been twitchy about involving the ultrasecretive National Security Agency—masters of electronic spying—more deeply in domestic security matters. Revelations that George W. Bush authorized the NSA (Motto: Never Say Anything) in the wake of 9/11 to expand warrantless electronic eavesdropping on Americans caused heartburn for both intelligence officials and private industry. Dragged into the controversy were phone companies and Internet service providers who took part in the program, although Congress later passed legislation that both tweaked and largely ratified Bush administration practices. (Congress gave retroactive immunity from civil lawsuits to private firms that collaborated.)

If anything, the Obama administration, citing the threats of computer hacking and cyberterrorism, is now moving to involve the NSA more deeply in domestic security issues. The growing role of the NSA—a Defense Department agency with thousands of military personnel—in domestic matters was on semi-public display on Friday. Homeland Security Secretary Janet Napolitano visited a nondescript office complex in Arlington, Va., for the formal opening of a new high-tech command post called the National Cybersecurity and Communications Integration Center (NCCIC, pronounced "en-kick"). The facility is officially described as “a 24-hour, DHS-led coordinated watch and warning center that will improve national efforts to address threats and incidents affecting the nation’s critical information technology and cyber infrastructure.”

The NSA’s official seal was displayed prominently on a big-screen graphic listing the center’s participants. The NSA’s director, Army Lt. Gen. Keith Alexander, was among the dignitaries standing at Napolitano’s side as she formally cut a ribbon inaugurating the facility, which, without its spooky graphics and tight security cordon, would look like a large newsroom or trading floor equipped with rows of computer workstations.