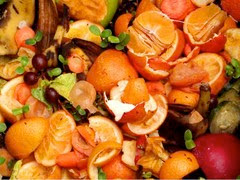 from reuters.com: The United Nations treated government ministers and officials to a meal of blemished African fruit and vegetables on Tuesday to highlight how perfectly edible food is being rejected by European supermarkets.

The food was all reject-grade by the standards of European buyers, who sometimes cancel orders after produce has been harvested. The rejected food often rots or is fed to livestock because farmers produce more than local markets can absorb.

“No economic, environmental or ethical argument can be made to justify the extent of food waste and loss currently happening in the world,” said Achim Steiner, head of the U.N. Environment Programme (UNEP) which hosted the dinner.

“With this dinner, we are demonstrating to retailers, consumers and policymakers who can push for change that the astonishing amount of food we throw away is not just edible and nutritious, but also delicious,” he said.

A total of 1.7 metric tons (1.87 tons) of food was collected, both for the meal and as a donation to local charities. Tristram Stuart, a British founder of the Feeding the 5000 campaign group that worked with UNEP, said farmers singled out supermarkets in Europe as the worst of their buyers abroad.

Fruit and vegetables were often rejected for cosmetic reasons such as color or shape. French beans had to be exactly the right length, for instance, and any that were too long had to be cut short, with the ends fed to livestock.

“We are demonstrating the colossal scale of gratuitous waste, even in countries like Kenya where there are millions of hungry people,” he said. “The waste of perfectly edible, ‘ugly’ vegetables is endemic in our food production systems.“