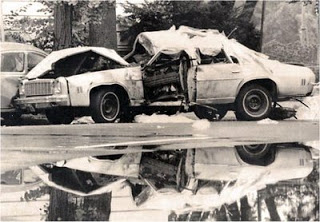 from national security archive: Only five days before a car-bomb planted by agents of the Pinochet regime rocked downtown Washington D.C. on September 21, 1976, Secretary of State Henry Kissinger rescinded instructions sent to, but never implemented by, U.S. ambassadors in the Southern Cone to warn military leaders there against orchestrating "a series of international murders," declassified documents obtained and posted by the National Security Archive revealed today.

The Secretary "has instructed that no further action be taken on this matter," stated a September 16, 1976, cable sent from Lusaka (where Kissinger was traveling) to his assistant secretary of state for Inter-American affairs, Harry Shlaudeman. The instructions effectively ended efforts by senior State Department officials to deliver a diplomatic demarche, approved by Kissinger only three weeks earlier, to express "our deep concern" over "plans for the assassination of subversives, politicians, and prominent figures both within the national borders of certain Southern Cone countries and abroad." Aimed at the heads of state of Chile, Argentina and Uruguay, the demarche was never delivered.

"The September 16th cable is the missing piece of the historical puzzle on Kissinger's role in the action, and inaction, of the U.S. government after learning of Condor assassination plots," according to Peter Kornbluh, the Archive's senior analyst on Chile and author of the book, The Pinochet File: A Declassified Dossier on Atrocity and Accountability. "We know now what happened: The State Department initiated a timely effort to thwart a 'Murder Inc' in the Southern Cone, and Kissinger, without explanation, aborted it," Kornbluh said. "The Kissinger cancellation on warning the Condor nations prevented the delivery of a diplomatic protest that conceivably could have deterred an act of terrorism in Washington D.C."

Kissinger's September 16 instructions responded to an August 30, 1976 secret memoranda from Shlaudeman, titled "Operation Condor," that advised him: "what we are trying to head off is a series of international murders that could do serious damage to the international status and reputation of the countries involved." After receiving Kissinger's orders, on September 20, Shlaudeman directed his deputy, William Luers, to "instruct the [U.S.] ambassadors to take no further action noting that there have been no reports in some weeks indicating an intention to activate the Condor scheme."

The next day, a massive car-bomb claimed the life of former Chilean foreign minister Orlando Letelier and his 26-year old American colleague, Ronni Karpen Moffitt, as they drove down Massachusetts Avenue in Washington D.C. The bombing remains the most infamous attack of "Condor" - a collaboration between the secret police services in Chile, Argentina, Uruguay, Paraguay, Brazil and several other Latin American military dictatorships, to track down and kill opponents of their regimes. Until 9/11, the Letelier-Moffitt assassination was known as the most significant act of international terrorism ever committed in the capital city of the United States.