ground zero: empire of the cacodemons 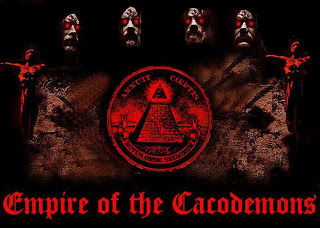 from clyde lewis: If there is a demonic war happening, then it is evident that the possessed avatars are far more organized now, and that they are in positions of power. They also have armchair warriors who cheer on the carnage and criticize those who see the perpetual human sacrifice in acts of war.

When we mix this demonic infestation with apocalyptic overtones Jonestown, Ruby Ridge, Waco and other calamities are all prologues. They were mere rehearsals to the more dramatic eschatological scenarios to follow.


We are dealing with a 6000 year old meme to bring to pass a 21st century scheme. Good and evil have now blurred together, and those shades of gray continue to baffle even those who claim to know the mysteries of God or to understand the Devil.

If the cacodemons exist, and the new empire will be run by a demonic Avatar then we must understand the process instead of using prejudice as a base for our opinions. This kindles social war.

Social war expanding to civil war is in the blueprint for the corrupt tyrannical empire of the future.

With extremism towards Barack Obama and racism as its catalyst we will learn the hard way how government and empire expansion is successfully carried out. We are prone to striking down the one who leads us in favor of the other.

Through the use of manipulation, intimidation, scapegoating, surveillance, social war, civil war, and murder we eventually realize that our government is possessed with blood lust and greed. In the demonically possessed mentality murder works. Murder is the way to advance the agenda and keep the planet in a constant state of conflict.

Murder is what “serious” henchman on the world stage do. The men in the shadows possessed by the reptilian powers direct the puppets to act on behalf of the cacodemons, the lines to power may be harder to trace than we realize.

In the Empire of the Cacodemon there is no law but the law of power; there is no way but the way of violence. There is no morality, there is no liberty, and we share no common humanity.

Eventually mankind will be made to hate each other. For some the hate will be so great that they will no longer see their fellow man as human, but as obstacles in the way of their demonic aspirations.

previous episode: soldiers of the one – the pale horse psyop

One response to “ground zero: empire of the cacodemons”