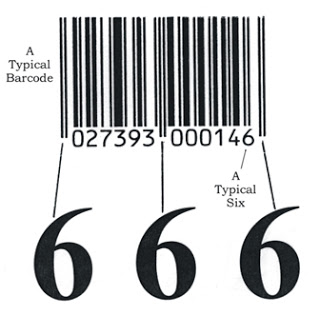 UPC = Warm Up to Mark of the Beast

"Rev.13 [16] And he causeth all, both small and great, rich and poor, free and bond, to receive a mark in their right hand, or in their foreheads: [17] And that no man might buy or sell, save he that had the mark, or the name of the beast, or the number of his name. [18] Here is wisdom. Let him that hath understanding count the number of the beast: for it is the number of a man; and his number is Six hundred threescore and six."

The Mark of the Beast (MOB) remains key passage from book of Revelation and Humanity always seems on the lookout for the unholy mark. A 2011 article, "The Mark of the Beast '666'," advises reader clearly on consequences of accepting it. We are all familiar with the UPC code. UPC bar-codes are on nearly every product, but you may not be aware bar-codes operate on a "666" system (picture).  Products we buy contain a "666" on the bar-code.  The UPC code may be a forerunner of the MOB?  Researchers suspect UPC tech could be used on implantable RFIDs that we may be forced to accept.  It only makes sense to employ technology in place for decades, moving it forward into the digital era, where "you are the product".  Would acronym be modified, at the point, for its human application to stand for "Universal Person Code"?


The Worldtruth.tv article suggests how public will be persuaded to accept mark:

Yes, it sounds so reasonable to accept it, but article warns:

"...the day is coming where you will be forced to have a chip put inside your body. When that day comes, you will know who the Antichrist is because he will be the one in power over the whole world. Accepting that chip will mean you side with the Antrichrist, and against God. Accepting the chip will doom your soul to Hell forever. Whatever you do, do not ever let anyone put a chip inside your body. It will be better to side with God and die at the Antichrist's hand then to accept the chip and spend eternity in Hell."

"Note: If the implantable RFID chip does turn out to the the Mark of the Beast, which seems highly
likely, it will not be until the actual reign of the Antichrist that it will have it's power and significance.
The Bible is quite clear that receiving the Mark, during the Tribulation, is completely and obviously
tied to the worship of the antichrist. No one will take the mark by accident. You will be asked to
swear allegiance to the antichrist as an act of worship. Anyone receiving the mark during the time
of the Great Tribualtion will know exactly why they are getting it. It will be beacuse they will be
acknowledging, falsely, the antichrist as God."