US carried out madrasah bombing 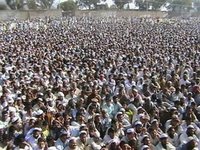 from times online: The bombing of a Pakistani madrasah last month, in which 82 students were killed, was carried out by the United States, a Pakistani official has admitted, writes Christina Lamb.

The madrasah in the tribal agency of Bajaur was bombed during a visit to Pakistan by the Prince of Wales amid allegations that it was being used to train suicide bombers.

“We thought it would be less damaging if we said we did it rather than the US,” said a key aide to President Pervez Musharraf. “But there was a lot of collateral damage and we’ve requested the Americans not to do it again.”

The Americans are believed to have attacked after a tip-off that Ayman al-Zawahiri, the deputy leader of Al-Qaeda, was present. Local people claimed the victims included boys as young as 12 and that the tribal area had been negotiating with the Pakistan government for a peace deal.

Pakistani officials insist they were shown satellite images of people training and have checked the identity cards of all those killed, and that all were adults.