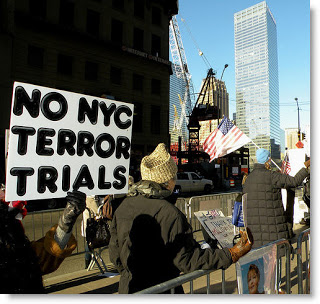 from nytimes: The Obama administration on Friday gave up on its plan to try the Sept. 11 plotters in Lower Manhattan, bowing to almost unanimous pressure from New York officials and business leaders to move the terrorism trial elsewhere.

“I think I can acknowledge the obvious,” an administration official said. “We’re considering other options.”

The reversal on whether to try the alleged 9/11 terrorists blocks from the former World Trade Center site seemed to come suddenly this week, after Mayor Michael R. Bloomberg abandoned his strong support for the plan and said the cost and disruption would be too great.

But behind the brave face that many New Yorkers had put on for weeks, resistance had been gathering steam.

After a dinner in New York on Dec. 14, Steven Spinola, president of the Real Estate Board of New York, pulled aside David Axelrod, President Obama’s closest adviser, to convey an urgent plea: move the 9/11 trial out of Manhattan.

“They were not received well,” said one city official.

republicans unite to halt trials of alleged 9/11 plotters
from afp: US lawmakers Tuesday unveiled plans to block public funding for US-based trials involving Guantanamo detainees who are accused of plotting the September 11, 2001 attacks. Republican lawmakers Frank Wolf and Lindsey Graham joined forces to introduce legislation which "would explicitly block this dangerous and wasteful trial from any domestic civilian court," Wolf said. They also won support from Democrats Jim Webb and Blanche Lincoln, as well as independent senator Joe Lieberman. If approved, the legislation would stop the Justice Department from using public funds to try the alleged mastermind of the 2001 attacks, Khaled Sheikh Mohammed, and his four co-accused, in domestic US courts.

dc air natl guard on 9/11 & the many deaths of osama:
updates to the complete 9/11 timeline
from history commons: After a hiatus of a couple of weeks, dozens of new entries have been published in the 9/11 Timeline over the last few days. The largest chunk of them covers events at the DC Air National Guard, based at Andrews Air Force Base, on the day of the attacks. Initially, officers assumed that the first crash into the WTC was an accident. However, after the second crash, Andrews learned the Secret Service wanted fighters launched. Although the Secret Service then said it didn’t on the phone, pilots started overwriting recent exercise data on their flight disks... There are also several new entries about Osama bin Laden, for whom al-Qaeda offered to arrange a TV interview in October 2001. After the interview had been done, western intelligence naturally managed to come into possession of it before it was broadcast by Al Jazeera. We also have some more about bin Laden’s health. He died of lung problems in December 2001, was buried in an earthquake in 2005, and expired in Iran in 2006, all of which makes his near-death condition in 2007 remarkable.