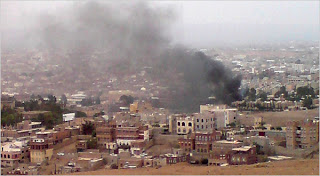 US embassy in yemen attacked, 16 killed

attack against embassy blamed on al-CIAda

from danger room: "A car bomb and rocket attack on the U.S. embassy in Yemen has killed at least 16 people, including civilians and Yemeni security guards," the AP reports. "Yemen has long been viewed as a haven for jihadists," the Times notes. "It became a special concern for the United States in 2000, after Al Qaeda operatives rammed the U.S.S. Cole in Aden harbor, on Yemen’s southern coast, killing 17 American sailors." The paper adds, "The U.S. compound has also been the scene of occasional political violence in previous years, including a large demonstration against the American-led invasion of Iraq in March 2003, in which two Yemenis were fatally shot and dozens injured." In April, the State Department "ordered all non-essential diplomatic staff to leave the country after an attack on the embassy claimed by al-Qaeda," Al-Jazeera observes. "A residential compound used by U.S. oil workers in [the capital city of] Sanaa had also come under attack from rockets at that time."

bush: yemen bombing 'a reminder we are at war'
from raw replay: President Bush commented about attacks at the US Embassy in Yemen. Bush made the remarks while meeting with General Petraeus in Washington. This video is from MSNBC’s News Live, broadcast September 17, 2008.