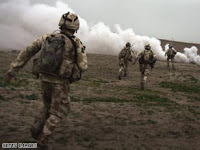 from bbc: Three British troops have been killed in Afghanistan by so-called friendly fire, the Ministry of Defence has said.

The MoD said the soldiers, from 1st Battalion The Royal Anglian Regiment, were killed at around 1830 local time (1500 BST) on Thursday.

It is understood the soldiers died when US fighter planes, called to support ground troops, dropped a bomb near their patrol in Helmand province.

Two other soldiers were also injured. Next of kin have been informed.

Defence Secretary Des Browne said he was “very saddened” by the death of “three brave men who were tragically killed in what is believed to be a friendly fire incident”.

He said such incidents were “rare” and it would be thoroughly investigated.

“We will look at this incident very carefully and make sure the families, who are uppermost in our thoughts, know exactly what happened to their loved ones,” he said.