US weighed use of cyberattacks to weaken libya 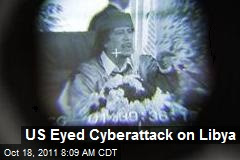 from nytimes: Just before the American-led strikes against Libya in March, the Obama administration intensely debated whether to open the mission with a new kind of warfare: a cyberoffensive to disrupt and even disable the Qaddafi government’s air-defense system, which threatened allied warplanes.

While the exact techniques under consideration remain classified, the goal would have been to break through the firewalls of the Libyan government’s computer networks to sever military communications links and prevent the early-warning radars from gathering information and relaying it to missile batteries aiming at NATO warplanes.

But administration officials and even some military officers balked, fearing that it might set a precedent for other nations, in particular Russia or China, to carry out such offensives of their own, and questioning whether the attack could be mounted on such short notice. They were also unable to resolve whether the president had the power to proceed with such an attack without informing Congress.