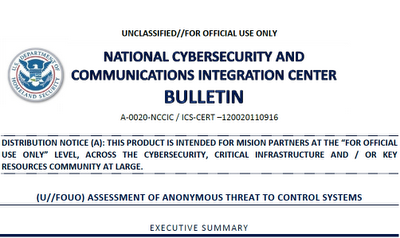 from the hacker news: DHS has analyzed the likelihood of Anonymous attacking industrial control systems (ICS) after the hacktivist group showed such intentions earlier this year. "Assessment of Anonymous Threat to Control Systems" that was drafted by the National Cybersecurity and Communications Integration Center (NCCIC) back in September. The document is not classified, but it is intended for official use only. The report describes an interest within Anonymous to target industrial control systems.