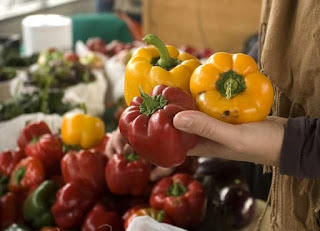 from ap: A new U.S. Department of Agriculture report says sales of "local foods," whether sold direct to consumers at farmers markets or through intermediaries such as grocers or restaurants, amounted to $4.8 billion in 2008. That’s a number several times greater than earlier estimates, and the department predicts locally grown foods will generate $7 billion in sales this year. While there’s plenty of evidence local food sales have been growing, it has been hard to say by how much because governments, companies, consumers and food markets disagree on what qualifies as local. The USDA report included sales to intermediaries, such as local grocers and restaurants, as well as directly to consumers through farmers markets, roadside stands and the like.