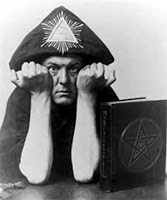 from telegraph: Six mysterious London deaths famously attributed to the 'Curse of Tutankhamun' were actually murders by notorious Satanist Aleister Crowley, a historian claims in a new book. Incredible parallels between Crowley and Jack the Ripper have also been discovered during research by historian Mark Beynon. Throughout the 1920s and 1930s, London was gripped by the mythical curse of Tutankhamun, the Egyptian boy-king, whose tomb was uncovered by British archaeologist Howard Carter. More than 20 people linked to the opening of the pharaoh's burial chamber in Luxor in 1923 bizarrely died over the following years - six of them in the capital... At the time, a frenzied Press blamed the 'Curse of Tutankhamun' for the deaths and speculated on the supernatural powers of the ancient Egyptians. But Mr Beynon has now drawn on previously unpublished evidence to conclude the deaths were all ritualistic killings masterminded by Crowley, an occultist dubbed "the wickedest man in the world". After unique analysis of Crowley's diaries, essays and books and inquest reports, the armchair detective argues that he was a Jack the Ripper-obsessed copycat killer... In his new book 'London's Curse: Murder, Black Magic and Tutankhamun in the 1920s West End', published this week by The History Press, Mr Beynon pins seven deaths on Crowley, six of which took place in London.