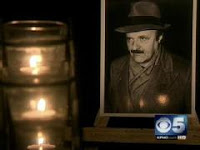 from kpho: A secret society called the Illuminati has been a topic of conspiracy theorists for decades. The Illuminati do exist, said attorney Jonathan Levy. At the center of a murder mystery is a man by the name of Paul Marcinkus, who lived right here in the Valley. Marcinkus was once a Papal guard, Archbishop and President of the Vatican Bank, which is how he knew fellow Italian banker Roberto Calvi. “They very well were the Illuminati, at least in Italy — powerful people behind the scenes, operating in secrecy,” said Levy, who has been in a legal battle with the Vatican for years... The Phoenix Archdiocese refused to speak to 5 Investigates about Marcinkus; however, it did release a statement: “Those priests who knew him in his retirement are not going to go on camera and speculate about rumor and innuendo that they know nothing about.” And so the mystery remains unsolved. “I think (Marcinkus) was a true foot soldier of the church,” Yoder said. “We stand a much better chance of finding out about the Kennedy assassination.”

update: crucified nun dies in 'exorcism'
from bbc: A Romanian nun has died after being bound to a cross, gagged and left alone for three days in a cold room in a convent, Romanian police have said. Members of the convent in north-east Romania claim Maricica Irina Cornici was possessed and that the crucifixion had been part of an exorcism ritual. Cornici was found dead on the cross on Wednesday after fellow nuns called an ambulance, according to police. A priest and four nuns were charged with imprisonment leading to death.