43 Stun-Gunned At Prisons’ Take Your Kids To Work Day 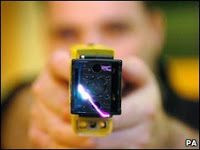 from miami herald: A total of 43 children were directly and indirectly shocked by electric stun guns during simultaneous “Take Your Sons and Daughters to Work Day” events gone wrong at three state prisons, according to new information provided Friday by the Florida Department of Corrections. Also, a group of kids was exposed to tear gas during a demonstration at another lockup. Three prison guards have been fired, two have resigned and 16 more employees – from corrections officers to a warden – will be disciplined due to the incidents that unfolded April 23, said DOC Secretary Walt McNeil. An investigation is ongoing. None of the children in any of the incidents required medical attention or was notably harmed, McNeil said. He said the children, who ranged in age from 5 to 17, were all children of prison officials. In nearly every case, the guards had permission from parents or grandparents to administer the “electronic immobilization devices,” McNeil said. “I can’t imagine what these officers were thinking to administer this device to children, nor can I imagine why any parent would allow them to do so,” McNeil said. “This must not happen again.”