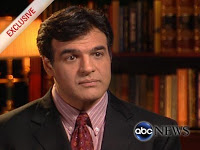 from majikthise: A retired CIA agent who lead the team that waterboarded terror suspect Abu Zubaydah went on to work as a security consultant for the film adaptation of The Kite Runner (2007).

Lobbyists for Viacom helped the producers of the film retain retired CIA agent and "countererrorism expert", John Kiriakou, according an Oct 4 article in the International Herald Tribune - before Kirkakou went public about his career as a torturer.

The producers of Kite Runner realized belatedly that the film's release might put movie's child stars in serious danger:

In late July, with violence worsening in Kabul, studio executives looked for experts who could help them chart a safe course. Aided by lobbyists for Viacom, Paramount's parent company, they found John Kiriakou, the retired CIA operative with experience in the region, and had him conduct interviews in Washington and Kabul.

update: cia 'furious' at kiriakou for talking about torture
from thinkprogress: On Monday, former CIA interrogator John Kiriakou confirmed to ABC News that al Qaeda leader Abu Zubaydah was waterboarded on orders from the White House. ABC News now reports that officials at the CIA were “furious” at Kiriakou and pushed for “a Justice Department investigation.” A Justice Department official, however, said that no such investigation is planned.