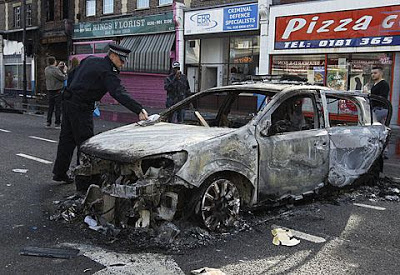 'panic on the streets of london, burn down the disco': tottenham cars & bldgs ablaze as 26 cops hurt & 42 arrested*

from voanews: Several British police officers were injured and a number of people arrested when rioting broke out late Saturday in a depressed district of London, Britain's capital. A protest over the fatal shooting of a 29-year-old man by police on Thursday that started peacefully suddenly turned violent. Several buildings, cars and a double-decker bus were set on fire before order was restored. The crowd numbering in the hundreds also broke shop windows and looted stores, pushing carts full of stolen goods down the streets of the Tottenham district of north London. Police are now patrolling the district with concern of more trouble later on Sunday. The rioting was the worst London has seen in years. Tottenham, home to a large number of ethnic minorities, has a history of racial tensions. It was the scene in 1985 of one of the most violent riots in Britain's history during which a police officer was hacked to death when Afro-Caribbean youths in a deprived housing estate of Tottenham went on a rampage.