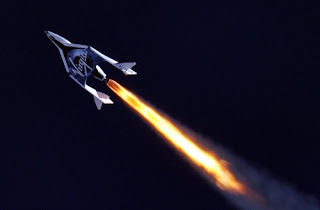 Universe Today informs, "SpaceShipTwo Fires Rocket Engines for First Ever Supersonic Test Flight." "The test flight began at about 7:02 a.m. local California time as SpaceShipTwo took off from Mojave strapped to the belly of the WhiteKnightTwo (WK2) mothership. S2 was released from the mothership at an altitude of 47,000 feet (14 km) some 45 minutes into the flight," reports article. Virgin Galactic Owner Richard Branson's "...near term goal is for SpaceShipTwo to fly to space – commonly defined as 62 miles (100 km) altitude – for the first time before year’s end, validate the vehicle with a rigorous test flight program of gradually expanding the flight envelope to insure full operability and safety and then carry the first revenue paying passengers to space thereafter from Spaceport America in New Mexico." Times, they are a changin'!