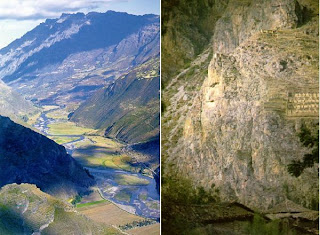 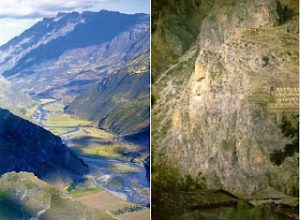 The Sacred Valley of Peru [pictured, left] seat of Inca civilization, only slowly yields its secrets to the outside world. Philip Coppens writes in, "Viracocha's Voyage," a reminder of "...a worldwide phenomenon, of creator beings walking the land, sculpting it as they go, turning into rocks, etc. The phenomenon is well-known with the Aboriginals and their Songlines in Australia." What the civilization of the  Inca Empire represented, is still, largely unknown in Coppen's view. Coppens attributes some of the exclusion from study to the Spanish, who deemed Inca culture primitive due to their practice of human sacrifice.

What is known about the Incas:

"The main interest of the Inca civilization is the “Sacred Valley”, which stretches from Cuczo, the “navel” of the Inca world to Macchu Picchu, the best known Inca structure that was rediscovered by Hiram Bingham in 1911. Practically, the valley continues south of Cuczo, towards Lake Titicaca. Situated at an altitude of 4 kilometres, the lake is the highest navigable lake in the world. It was on an island in this lake, the Island of the Sun, that the Inca legends state that the creator god, Viracocha, appeared on Earth. It is from here that Viracocha’s voyage began. Amidst spectacular scenery, the valley descends to 3400 metres in Cuczo and 2800 metres in Macchu Picchu. Though the rivers will contribute to the Amazon river, it is said that Viracocha continued on his path, walking SE/NW, until he reached the Pacific Ocean."

According to the Creation Myth recorded by Juan de Betanzos:

"...Viracocha rose from Lake Titicaca (or sometimes the cave of Pacaritambo) during the time of darkness to bring forth light. He made the sun, moon, and the stars. He made mankind by breathing into stones, but his first creation were brainless giants that displeased him. So he destroyed it with a flood and made a new, better one from smaller stones. Viracocha eventually disappeared across the Pacific Ocean (by walking on the water), and never returned. He wandered the earth disguised as a beggar, teaching his new creations the basics of civilization, as well as working numerous miracles. He wept when he saw the plight of the creatures he had created.[citation needed] It was thought that Viracocha would re-appear in times of trouble. Pedro Sarmiento de Gamboa noted that Viracocha was described as 'a man of medium height, white and dressed in a white robe like an alb secured round the waist, and that he carried a staff and a book in his hands.'"

Coppens sees in more recent approach to study by taking in entire landscape of the Incas, perhaps, a better method that may yield more answers about the civilization?  The author is certain, meanwhile, "...tourists continue to walk the Sacred Path of Viracocha: many travel from Tiahuanaco, to Cuczo, onward to Ollantaytambo [Viracocha's likeness on mountainside, pictured right] and finally Macchu Picchu. The path is a natural way of moving about the country and has been walked for hundreds of generations, from the earliest farmers to the Inca kings… It is an opportunity for every man to walk in the footsteps of Viracocha – God." A recent National Geographic special can be located on You Tube, "Ghosts of Macchu Picchu," and treats viewer to spectacular beauty of these Incan ruins!